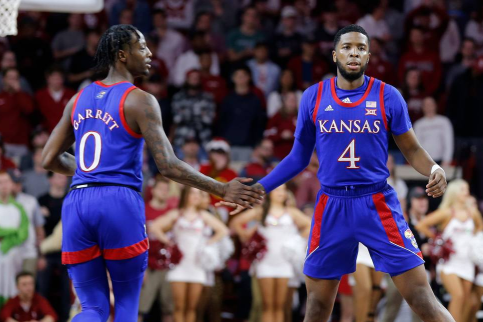 Two top teams in the Big 12 square off on Tuesday night when No. 3 Kansas plays host to No. 7 West Virginia. Both teams are entering the game with a 7-1 overall record with their sole loss coming against the same opponent – Gonzaga.

The Mountaineers and the Jayhawks are also entering the game with a similar betting record. West Virginia sits at 4-4 ATS while Kansas, having played a game against a division 2 team which didn’t involve a point spread, sports a 3-4 ATS record heading into Tuesday night’s matchup.

Kansas is set as a 2.5-point home favorite at FanDuel.

Both Teams Keep the Ball Down Low

This should bode well for the Jayhawks as they have an advantage in most major big-man statistics including rebounds, blocks, and opponent two-point field goal percentage. They rank 73rd in the country with 4.1 blocks per game and 33rd in rebounding, grabbing 55.6 percent of boards.

Battle-Tested Kansas has Proven they can Hang with the Best

The Jayhawks moved up to No. 3 in the latest AP Poll and for good reason. They’ve faced four ranked teams so far this season with their latest win coming in a hard-fought battle against No. 14 Texas Tech last week. Their only loss of the season came against No. 1 Gonzaga in their opening game.

While West Virginia has also looked impressive this season, they’ve only played two ranked teams to-date. One was an 87-82 loss to Gonzaga, the other was an 87-71 win over No. 19 ranked Richmond in their final out-of-conference matchup. Kansas will be the Mounaineers toughest challenge since facing the Bulldogs.

Both Teams have a Rapid Pace of Play

FanDuel has the total set at 140.5, which may mean the OVER is a good bet. Both teams like to play fast as they rank 50th and 60th in field goal attempts per game. They’re also both in the top half of the country in possessions per game.

Derek Culver the Key to the Mountaineers Success

The MVP for West Virginia’s squad so far this season is junior forward Derek Culver. He’s averaging a double-double per game with 14.4 points and 10.9 rebounds. On top of that, he’s also averaging 2 assists and 1.3 blocks per game. He’ll be pivotal in this matchup against the Jayhawks as the big men for each team will decide the outcome.

He’ll likely be matched up with Kansas freshman forward Jalen Wilson. Wilson is averaging 14.3 points and 8 rebounds per game.

The devil’s in the details in this matchup between these two highly ranked Big 12 squads. While both teams have success shooting the ball inside the arc, Kansas has a slight advantage in many important statistics including rebounding, blocks, steals, and free throw percentage.

The Jayhawks have also faced tougher competition to-date and are undefeated since their opening game of the season. They’ve shown they can beat all different styles of teams including offensive teams like Creighton as well as defensive minded teams like Kentucky and Texas Tech. Kansas is one of the most well-rounded teams in the country and are well deserving of their number 3 ranking. It’s time to bet on them before their value dissipates as the season goes on.