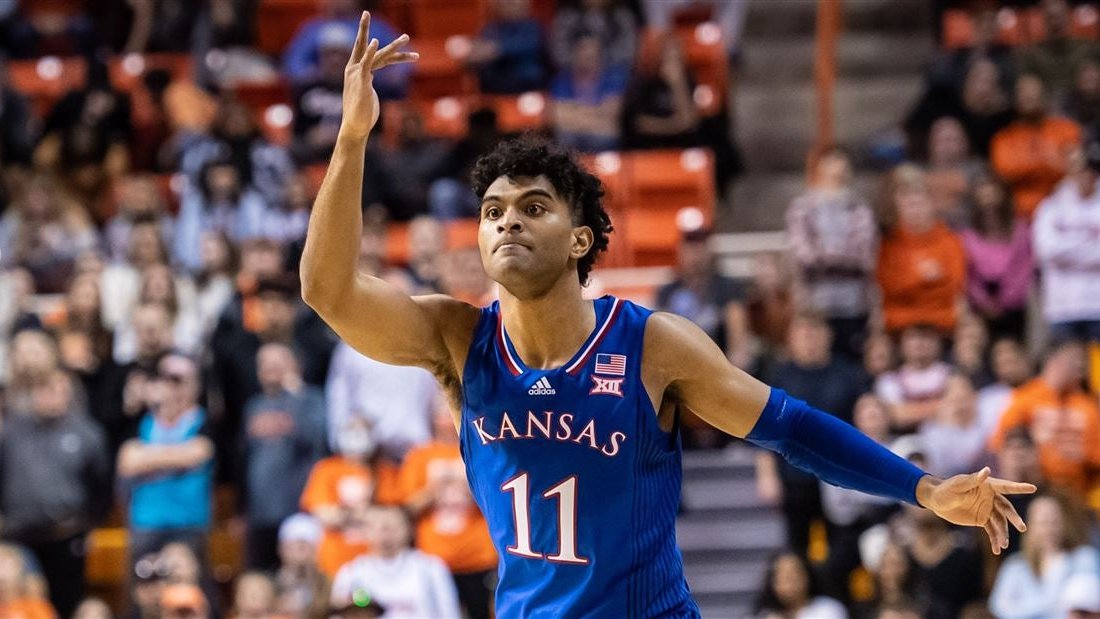 After missing out on a Big 12 title for only the third time in the Bill Self era, Kansas got their mission to return to the top of the conference off to a winning start with a win at Oklahoma State on Tuesday night. On Saturday, they will seek to make it a 2-0 start and two straight road wins as they visit Texas Tech.

Texas Tech might never reach the heights they did under former coach Chris Beard, but they are still very relevant in the Big 12. Their conference campaign started with a loss at Iowa State though, as they managed only 47 points against the Cyclones in a four-point loss.

The road will not get any easier for the Red Raiders either. The Big 12 is currently projected to have seven teams in the March Madness field, with only Kansas State, Oklahoma State, and West Virginia not in ESPN’s latest Bracketology release.

Kansas is as complete a team as there is in the nation. They have experience all over the floor and might not have reached their ceiling yet. Lubbock is a tough place to play, however.

Kansas began the week with a road win over Oklahoma State. It was a wild game where at one point the Jayhawks missed 19 straight shots. Ultimately, they won by 11 points showing their resilience, and the ability to go from 0-60 pretty quickly.

The Jayhawks have just one loss this season, a last-second, one-point loss to Dayton. If that game had been a win they might be at the top of the rankings, not conference rival Baylor.

Texas Tech has no bad losses this season, as their other two losses are to Providence and Gonzaga. But the Red Raiders have only one quality win, an overtime win over Tennessee on December 7. They are elite defensively but when they need a bucket, they struggle.

That may not change against Kansas, if the Red Raiders are once again without leading scorers Terrence Shannon Jr. (14.3 PPG) and Kevin McCullar (13.5 PPG). Shannon, an NBA-level talent, has missed the past four games due to back spasms. McCullar, meanwhile, missed the Iowa State game due to an ankle injury.

The Red Raiders had only seven players available for the game against Iowa State. They can ill-afford to be similarly shorthanded against a superior Kansas team.

I have to admit that I really like this Jayhawks team. On offense they have everything. They have traditionally been good inside the arc, but they are making their threes at more than a winning rate too this season (over 37%). I am not sure they are as good as Gonzaga but that is a pretty good comp for this game.

In case you missed that one, the Zags and Red Raiders were pretty even for about the first 25 minutes before the Bulldogs pulled away for a double-digit win last month. They just had too many different ways to score so even though they were well under their average in scoring for the game, they won by 14 points.

I am looking for Kansas to do pretty much the same thing, though it might take a little longer to pull away on the road against a conference opponent.

Texas Tech is going to do everything in its power to slow down this game as much as possible. They rank 67th in the country in offensive efficiency, which isn’t bad. But they are never in a rush and thus hard to back in a game where they will likely have to play catch up or trade baskets. If they are still without both Shannon and McCullar, that task will almost certainly be too much for them.

Can Texas Tech somehow manage to score 70 points. That may be the only way they keep up with Kansas, who has not scored less than 73 in a game this season. The Red Raiders have not scored more than 68 points against a top-100 team yet, and that will spell disaster for them in this matchup against the Jayhawks.

The 2022 French Open is underway at Stade Roland Garros in Paris, France, and we are already almost through the first week of play. Tomorrow, the remaining third-round matches will take place, after which the men’s and women’s singles draws will be down to their final 16 contenders. In both men’s and women’s singles, there END_OF_DOCUMENT_TOKEN_TO_BE_REPLACED