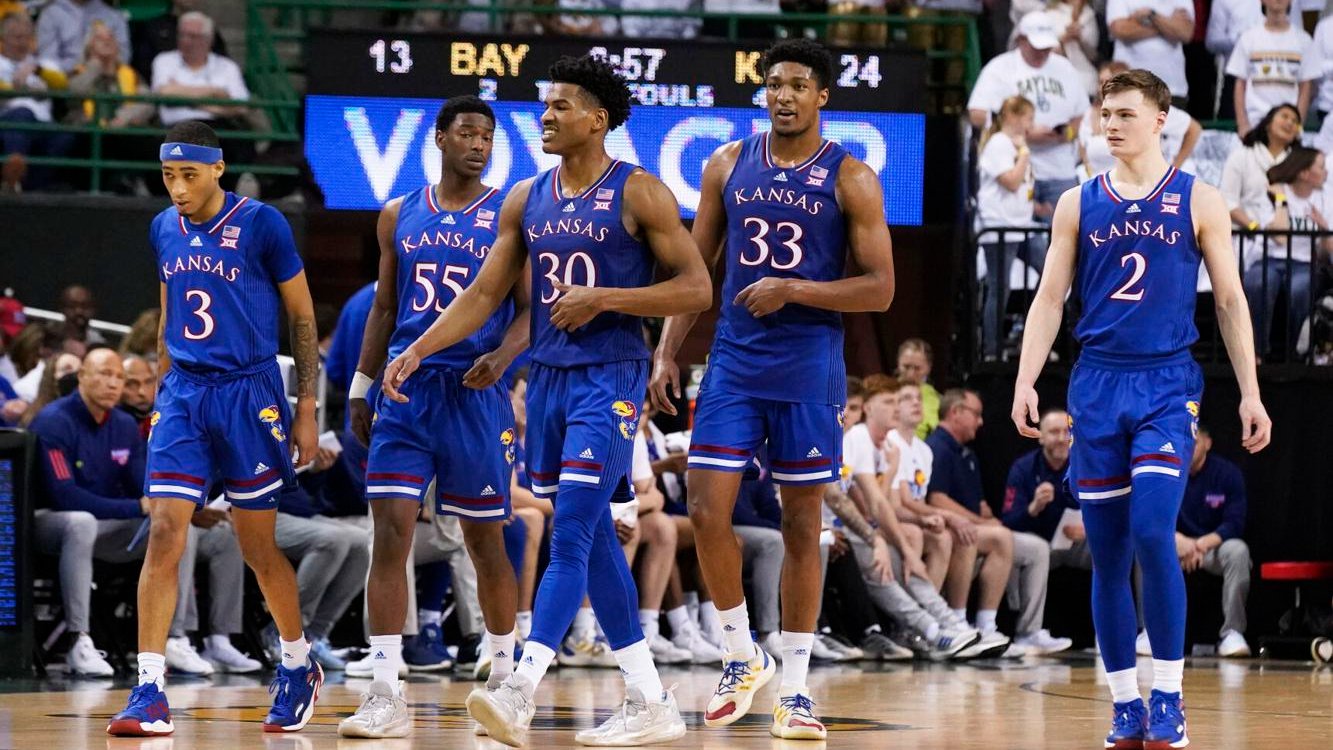 Despite losing at Baylor on Saturday, Kansas is still in the driver’s seat for the Big 12 regular season title. However, their hopes for a #1 seed in the NCAA Tournament took a hit with their loss to the Bears. Tonight, they will look to move a win closer to the regular season title and aid their March Madness resume with a win at upset-minded TCU.

In Waco, Kansas jumped on Baylor early, but the Bears turned around the deficit and pulled away to win 80-70. After Baylor won at Texas last night, Kansas (12-3, .800) is only ahead of Baylor (13-4, .768) by percentage points in the Big 12 standings. But with two games against TCU and a home game against the Longhorns, the Jayhawks should seal the deal.

However, they could be in for a serious challenge in Fort Worth. The Horned Frogs head into this contest fresh off of an upset of top-10 Texas Tech. That win may well have all but sealed TCU’s spot in the NCAA Tournament for the first time since 2018. But they will no doubt be eager to put it absolutely beyond doubt with a win over Kansas.

Will a Second Straight Top Ten Team Go Down at TCU?

Going in, the Horned Frogs had lost four of five games and were 6-8 in the Big 12. And their best wins of the season, which came at Iowa State, at Oklahoma, and at home against LSU, carried only so much weight with the mediocre results each team has had in conference play.

TCU allowed 41 first-half points against Texas Tech, trailing by eight at the break. And though they clamped down defensively in the second half, they still trailed 60-54 with five and a half minutes left.

But they outscored the Red Raiders 15-5 the rest of the way, and Xavier Cork’s dunk with a little over a minute left put the Horned Frogs ahead for good.

Even if they lose to Kansas tonight and Thursday night, a win at West Virginia in their regular season finale should see TCU have a solid place in the field regardless of what happens in the Big 12 Tournament.

But can they stun the Jayhawks to really put any doubts to bed?

Well, history is certainly not on their side. Here is a look at what they are up against.

The Horned Frogs won their first conference matchup with Kansas on February 6, 2013, when they defeated the #5 Jayhawks 62-55 for their first-ever Big 12 win. Then they proceeded to lose ten in a row to Kansas, breaking the streak with a stunning upset of the top-ranked Jayhawks in the Big 12 Tournament five years ago.

Since then, the Jayhawks have claimed eight wins in a row. If there is any consolation for TCU, it is that six of those meetings have been decided by single digits. Last season, they were routed 93-64 at home but were much more respectable in their trip to Lawrence, losing 59-51 at Allen Fieldhouse.

Kansas vs. TCU Prediction and Picks

To have a chance for a second straight major upset, TCU will need another big game from Miles and significant contributions from others as well. It is very unlikely that Kansas will have another offensive performance like they did at Baylor.

Against the Bears, the Jayhawks shot a season-low 34.3 percent from the field, making only 24 of 70 shots. And after hitting a season-high 15 threes (at a clip of 62.5 percent) against Kansas State, Kansas was only 7 of 28 from outside in Waco.

So, it is not very likely that they will have another poor offensive performance against TCU. The Horned Frogs allow only 64.4 points per game, but since holding four straight opponents under 60 points early in Big 12 play, TCU has been unable to keep consecutive conference opponents under 70 points.

Additionally, the Horned Frogs have scored 70+ points only three times in Big 12 play. That really puts the onus on their defense to step up in a big way against the Jayhawks, who have scored 70+ points in 24 of 28 games this season, including 12 of 15 Big 12 games (ten in a row since a 67-64 win at Oklahoma on January 18).

TCU may well be able to hang with Kansas for a while but look for the Jayhawks to pull away and move one step closer to reclaiming Big 12 supremacy.

It has been a miserable month for the Seattle Mariners, and things are unlikely to get any better tonight as they welcome AL Cy Young Award favorite Justin Verlander and the Houston Astros to T-Mobile Park. After just missing out on the MLB playoffs last season, the Mariners entered this season with hopes of finally END_OF_DOCUMENT_TOKEN_TO_BE_REPLACED