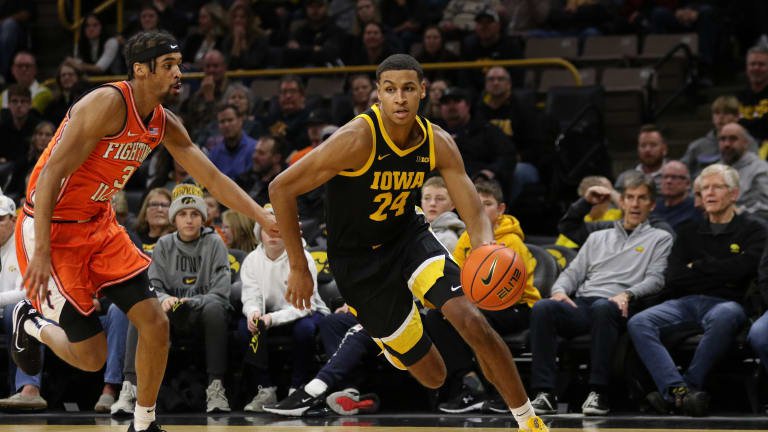 Over the past month, Iowa has been one of the hottest teams in college basketball. Today, they look to close out the regular season with a sixth straight win as they visit Illinois in a matchup of ranked teams.

Midway through Big Ten play, it wasn’t a certainty that the Hawkeyes would be in the NCAA Tournament. But with eight wins in their past nine games, Iowa is safely in the field and then some.

The Illini, meanwhile, enter the final day of the regular season with a shot at a share of the Big Ten title and the top seed in the upcoming conference tournament, which will be held in Indianapolis. But it will require a Nebraska win at Wisconsin, along with a win over Iowa.

Regardless of the outcome, it has been a strong season for Illinois, who are in line to be at least a #4 seed when the NCAA Tournament bracket is announced in a week’s time.

Can Iowa Continue Its Prolific Offensive Production at Illinois?

Defense may win championships, but it also doesn’t hurt to be able to score plenty. And the Hawkeyes do that with the best of them.

The Murray twins and Bohannon all shoot at least 38 percent from three. Overall, Iowa shoots 35.8 from deep as a team. Only 45 teams in the country average 9+ threes per game, and Iowa is one of 24 teams who do that while shooting at least 35.8 percent.

With that kind of team effort, Iowa should be considered one of the top March Madness sleepers. And it is no surprise that, after a rough patch in conference play, the Hawkeyes are hitting their stride at the business end of the season.

Past Nine Games for Iowa

In this stretch, every win has been by double digits, with four wins by 20+ points. The closest win was a 10-point win at Nebraska on February 25.

Yes, they have played some of the poorer teams in the conference in Maryland, Minnesota, Nebraska, and Northwestern.

But they also won by 13 at Ohio State, delivering the Buckeyes their first home loss of the season, throttled Michigan State by 26, and silenced Michigan after the Wolverines put up 85 and 87 against Illinois and Michigan State in the two games prior.

How far can the Hawkeyes go in the NCAA Tournament? Iowa has gone no further than the round of 32 in any of its five previous Big Dance appearances under coach Fran McCaffery and exited at that round last season as a #2 seed.

The last time the Hawkeyes made it to the second week was a Sweet 16 appearance in 1999, the final season under coach Dr. Tom Davis, the program’s all-time winningest coach.

But if this team can keep up their current level of play into the NCAA Tournament, they certainly have the potential to reach the Sweet 16 and beyond.

When these teams met in Iowa City on December 6, the Illini edged the Hawkeyes 87-83. In that matchup, 41 points were scored in the final four minutes, including 27 in the final 93 seconds.

Illinois doesn’t light up the scoreboard with the frequency that Iowa does, but the Illini do average 76.3 points per game. So, they are certainly no slouches in the scoring department.

Kofi Cockburn (21.0 PPG, 10.5 RPG), who, like Keegan Murray, is an All-American and Wooden Award candidate, leads the way for Illinois. But the Illini also have four double-digit scorers, including sharpshooter Alfonso Plummer (15.1 PPG), who shoots 42 percent from three and had 21 in the first meeting with Iowa.

It’s tough to beat against Iowa with how they have been playing. But look for Illinois to be up to the task of outscoring Iowa again as they complete the regular season sweep of the Hawkeyes.

The 2022 Formula 1 season is only six races deep, but the race for this season’s championship alerady appears to be down to just two drivers. Last season, Red Bull driver Max Verstappen claimed his first Formula 1 World Drivers’ Championship in highly controversial circumstances, with Lewis Hamilton denied what would have been a record-breaking END_OF_DOCUMENT_TOKEN_TO_BE_REPLACED