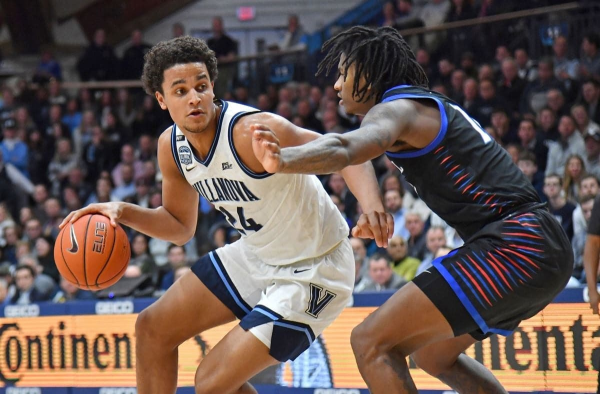 Tuesday night features a battle of Big East and Top 25 teams as the No. 13 Butler Bulldogs (15-3) travel to Finneran Pavilion to take on the No. 9 Villanova Wildcats (14-3). Currently, Butler sits at 3-2 in the conference, good for fourth behind Providence at 4-2.

Villanova is second in the conference at 4-1, trailing only Seton Hall, which is a perfect 6-0. Regardless, this is not only a big game for their overall conference standings but could have national ranking implications as well. Tipoff for this one is scheduled for 7 pm ET.

Butler actually comes into this game having lost two in a row. The Bulldogs’ first loss was a little more understandable, as it was against Seton Hall. On Saturday, though, the Bulldogs struggled on the road to the tune of a 79-66 loss against unranked DePaul.

While Butler comes into this one on a losing streak, Villanova has won four in a row at this point. None of those wins came over a ranked opponent, and in three of the four, the game was relatively close at six points or less.

The Wildcats’ last loss was a road setback to unranked Marquette. Thus, while they are talented and deserving of the No. 9 seed, there is certainly some volatility to this team as well.

Villanova comes into this one as a four-point favorite playing at home. The over/under for total points scored sits at 129.

After a couple of tough losses, expect Butler to come out strong in this one. If the Bulldogs are going to take Villanova down, though, they have to both pick up their defense and get good games on the offensive end too.

Villanova’s main goal will be to continue to exploit the recent defensive struggles of Butler. To do so, the Wildcats will look to their starting five, all of whom are averaging double-digit points. The leaders for Villanova have been Saddiq Bey (15.1 points) and Collin Gillespie (14.9 points, 4.5 assists).

Can Villanova Stay Unbeaten At Home?

On the season, Villanova has been a perfect 9-0 when playing at home and will look to continue that streak against Butler. On the flip side, Butler is 3-2 when playing on the road this season. Still, this comes down to a solid Villanova offense at home taking on an elite Butler defense.

The problem for Butler, though, is its current losing streak has seen that elite defense go by the wayside, as it allowed both Seton Hall and DePaul to eclipse the 75-point mark in their last two games. Now, the Bulldogs face a much tougher and consistent team in Villanova on its own court.

If Butler’s defense decides to show up, it might be an interesting game, but for my money, I am taking Villanova despite laying the four points.