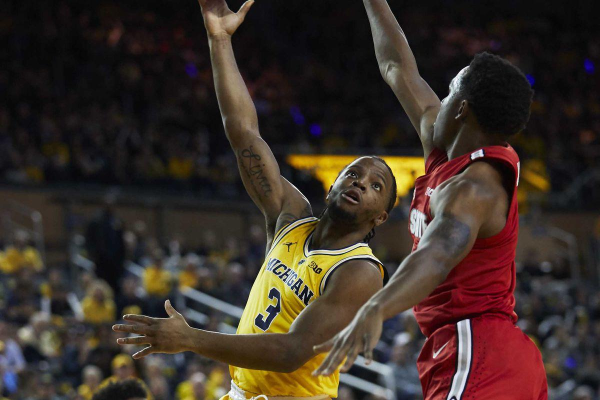 Friday night will feature a very intriguing Big Ten matchup as the no. 5 Michigan Wolverines (20-1, 9-1 in the Big Ten) travel to Carver-Hawkeye Arena to take on the Iowa Hawkeyes (16-5, 5-5 in the Big Ten). This is a matchup of one of the nation’s best defenses against one of the better offenses.

For Michigan, they come into this one having won three in a row since dropping a 64-54 loss to no. 24 Wisconsin a couple of weeks ago. In their most recent matchup on Tuesday, they beat Ohio State 65-49. For Iowa, they come into this one having lost two in a row. Last week they lost to no. 6 Michigan State 82-67 and followed that up with a surprising loss against Minnesota, 92-87. They will look to shock Michigan to help get their conference play back on track. The two will square off Friday with tipoff scheduled for 7:00 pm ET.

In this contest, the Michigan Wolverines come in as 3-point favorites despite playing on the road. The over/under on total points scored comes in at 143.5.

Defensively, Michigan has been the 2nd best team in the country in scoring defense as they are allowing just 56.1 points to opposing teams. Their defense can be suffocating at times, and they are allowing opposing offenses to shoot just 39.2% from the field (16th in the nation). For Iowa, defense is not their strong point. They rank 237thin the country, allowing opposing teams 73.6 points per game. In their last two games, the Hawkeyes allowed Michigan State 82 points and Minnesota 92.

On the offensive side, Iowa definitely comes in much better. They rank 30th in the country in scoring, averaging 82.2 points per game. They also rank 47th in the nation in field goal percentage, shooting 47.6% from the field. For Michigan, they come in much lower on the offensive side, averaging 71.4 points per game, good for 233rd in the country.

Key For Michigan Is Shutting Down Hawkeyes’ Offense

It is always interesting when you have polar opposites meet. In this case, you have one of the best defenses against one of the best offenses matching up. While I don’t see Iowa lighting up the scoreboard, I also think that Michigan will have their work cut out for them. As a result, they are going to need some of their own scorers to step up.

Leading the way for the Wolverines this year in scoring has been freshman forward Ignas Brazdeikis. He is averaging 15.1 points and 5.5 rebounds while shooting 46.7% from the field and 37.1% from behind the arc. Aside from Brazdeikis, they have two other players averaging double-digits. Charles Matthews (12.9 points, 5.2 rebounds, 1.2 assists, 1.2 steals) and Jordan Poole (12.7 points, 3.1 rebounds, 2 assists, 1 steal) have both had decent years.

Iowa Looking For Upset At Home

Nothing exemplifies how dynamic Iowa’s offense can be more than the fact that they have five players who are averaging double-digits. Still, they are led by junior forward Tyler Cook. Cook is averaging 16.6 points, 8.1 rebounds and 2.7 assists per game. He is also shooting 57.9% from the field.

Outside of Cook, the other four players averaging double-digits are forward Luke Garza and guards Joe Wieskamp, Jordan Bohannon, and Isaiah Moss. Garza is averaging 14.8 points and 4.7 rebounds per game while Wieskamp is averaging 11.2 points and 4.9 rebounds. Bohannon (10.4 points, 2.4 rebounds, 3.4 assists) and Moss (10.2 points, 2.6 rebounds, 2.3 assists) have also been solid.

Michigan had a tough stretch of about a week that saw them lose to Wisconsin and then barely skate by Minnesota. Their last two games, though, have seen them tracking in the right direction, having beaten both Indiana and Ohio State easily. More importantly, they have shown their dominance in defense in those games, allowing those two teams to score an average of about 48 points. While Iowa will likely put up more than 48, I still think Michigan is going to be able to handle them relatively easily. I see the defense holding relatively firm and Michigan’s offense being able to put enough up to not only win but cover the spread as well. For my money, I am taking Michigan, even laying the 3 points.