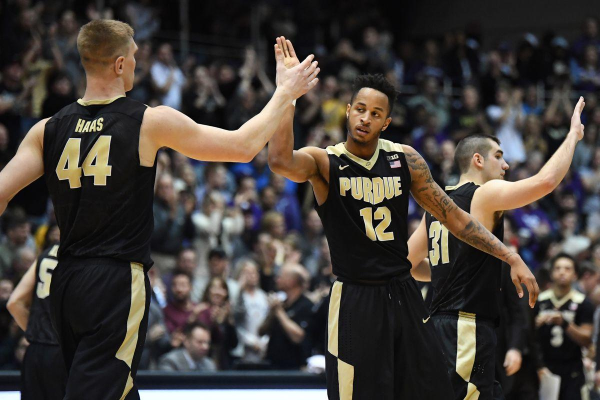 A major showdown will take place in the Big Ten on Thursday night. The Purdue Boilermakers will host the Maryland Terrapins at Mackey Arena in a battle of two of the top teams in the conference. Maryland has climbed into the top-25 rankings thanks to a strong start to the season, while Purdue has dropped out of the rankings. With both teams averaging over 80 points per game, this could be a shootout.

Purdue has lost three games this season, but all three of their losses come against teams ranked in the top-25. The Boilermakers got off to a rough start in Big Ten play, losing at Michigan by nineteen points. Maryland did not play particularly well in their Big Ten opener, but were able to beat the Penn State Nittany Lions. The Terrapins are 7-1 this season, with their only loss coming against the University of Virginia. The Boilermakers are 6.5 point favorites over the Terrapins in this game.

All-American Carsen Edwards has been incredible for the Boilermakers this season, but he needs some help. Edwards is averaging a team high 24.4 points per game this season, and he is on the short list for the Wooden Award. You can expect that Maryland will pay a ton off attention to Edwards, and the rest of the Purdue squad will need to step up in this game. Purdue is averaging over 80 points per game on the season, so the potential for scoring points is there.

Ryan Cline has done his best to backup Edwards this season, averaging 15.3 points per game. The Boilermakers lost one of the most decorated group of seniors in Purdue history last season, and the program is still trying to figure things out. Purdue is a lot smaller this season, and they have struggled to defend the paint. The Boilermakers are giving up just 68 points per game, but they will face a tough challenge against a big Maryland squad.

Maryland Looks Solid On Both Ends

Maryland has five different players averaging double-figures this season, and they seem to keep getting better each game. Anthony Cowan Jr. leads the team with 16.4 points and 4.5 assists per game. He will need to make plays for himself in his teammates if they are going to pull off the upset. Center Bruno Fernando has chipped in with 15.4 points and a team high 10 rebounds per game this season. It will be interesting to see how the Terrapins respond in their first difficult road test of the season.

The Big Ten is one of the deepest conferences in America this season, and these two teams should factor into the title mix by season’s end. Maryland has been one of the most surprising teams in the country so far this season, but playing on the road in the Big Ten is a different animal. The Terrapins hope that their size and depth can propel them to a 2-0 conference record.

Purdue got destroyed in their Big Ten opener, but winning at Michigan is nearly an impossible task. Look for the Boilermakers to respond with a much better effort at home in this game. Carsen Edwards is simply too good, and he will carry his team to a big win over the Terrapins. Bet the Purdue Boilermakers -6.5 over the Maryland Terrapins.