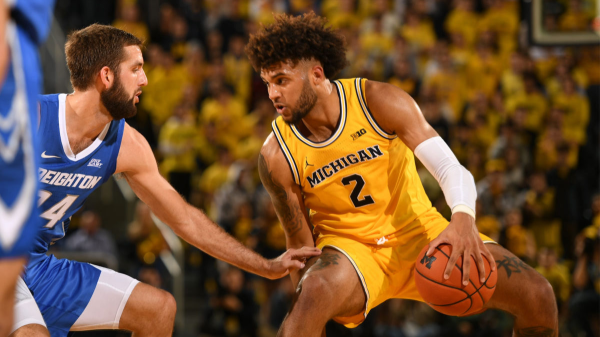 Wednesday night features a Big Ten showdown as the No. 5 Michigan Wolverines (8-1) and the Illinois Fighting Illini (6-3) square off at the State Farm Center in Champaign, Ill. Michigan looks to continue what has been a pretty dominant start to the season and hopes to ascend towards the No. 1 spot in the country (especially after both No. 1 Louisville and No. 4 Maryland lost Tuesday night). For the Illini, this would be the type of signature win that could get them going towards a national ranking. Tipoff for this one is scheduled for 9 pm ET.

The Wolverines have had a really impressive start thus far. Their only loss came against No. 1 Louisville. Early on, though, Michigan has shown it is legitimate, as it has beaten both No. 17 North Carolina and No. 6 Gonzaga. Coach Juwan Howard has the Wolverines looking like an early candidate to be a favorite come March.

Illinois coach Brad Underwood has his troops playing well to start the season, as even some of its losses have been admirable. For instance, last Saturday, the Illini lost to No. 4 Maryland but took it down to the wire as they lost 59-58. Their only big loss was to No. 15 Arizona, which beat them 90-69. Still, the Illini are the type of team that can come out of nowhere and shock you if you aren’t careful, something that Michigan is likely well aware of.

Michigan comes into this one as a one-point favorite despite playing on the road. The over/under for total points scored is 142.5.

Illinois has played some teams close, but it would love nothing more than to get its first big upset against a conference opponent. Leading the way for Brad Underwood’s squad this season has been freshman Kofi Cockburn, who is averaging 15.4 points and 10.7 rebounds per game. It will be interesting to see Cockburn and Teske go at it in the paint Tuesday.

Taking Michigan On The Road

Even though Illinois’ start to the season has been respectable, the spread on this one seems awfully low to me. To get the fifth-ranked team in the country, one who many think could be the best when it is all said and done, at just -1 against a good, not great Illinois team seems like a gift. Granted, Illinois has shown a knack early on for playing teams tough and is 5-1 at home, but I will still take the veteran presence of Howard’s Wolverines. For my money, I am taking Michigan -1 against Illinois.