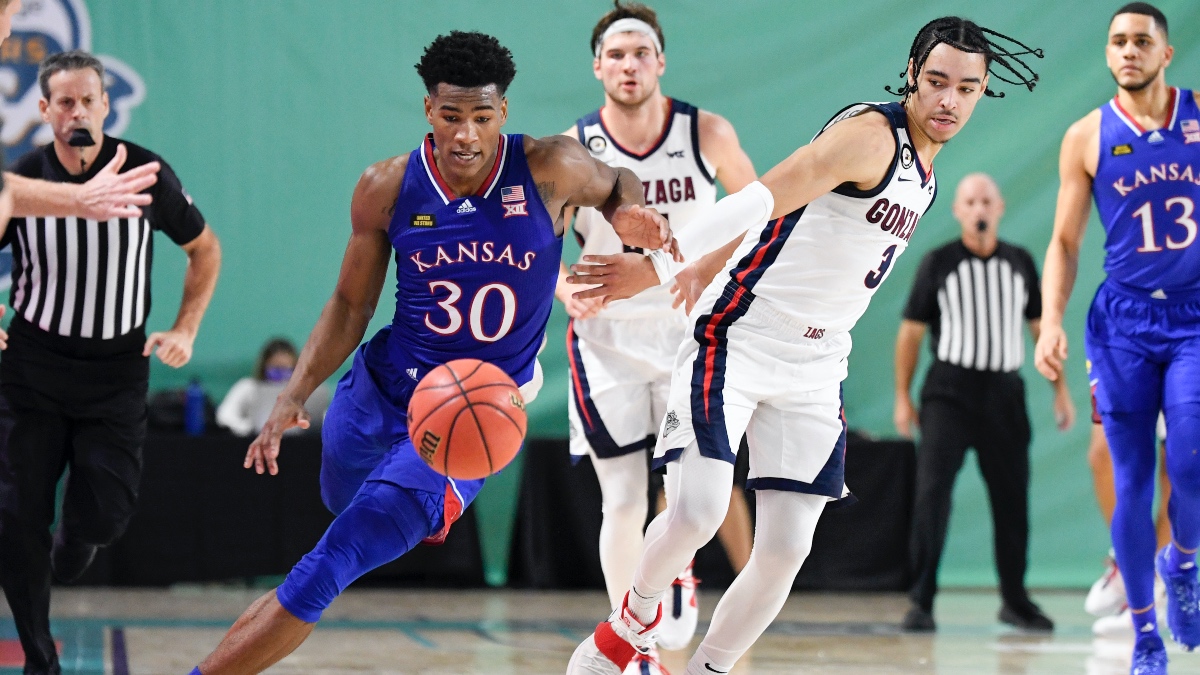 Now that the College Football season is winding down, College Basketball will be taking over as primary viewing for sports fans on Saturdays. With ranked matchups across most of the Power 5 conferences, this Saturday’s slate is set to be a good one.

Two top ten ranked teams in the Big 12 get the day started when No. 3 Kansas plays host to No. 8 Texas. Then the undefeated Arkansas Razorbacks will make a strong case to be listed in the new AP Poll if they can get by No. 12 Missouri. Luka Garza and the No. 10 Iowa Hawkeyes will look to make a statement when they hit the road to take on No. 14 Rutgers in Big Ten action. In the ACC, the battle of Virginia is set to take place between No. 24 Virginia Tech and No. 23 Virginia. Finally, can Duke get back on track when they take on No. 18 Florida State in the prime time slot?

All lines and totals listed below are as per FanDuel.

No. 8 Texas will try to take over as the team to beat behind Baylor in the Big 12 when they take on Kansas at Allen Fieldhouse. Both teams enter the game with a single loss on their records and they’re also both just 4-4 ATS heading into Saturday. Their Over/Under record is identical as well, the OVER is 3-5 for both teams ahead of this matchup.

It’s not just their records that are similar, their statistics are eerily similar as well. The Longhorns enter the game shooting 44.3 percent from the field while Kansas has almost the exact same FG percentage at 44.0 percent. They’re also neck-and-neck in assists, blocks, rebounds, and opponent FG percentage.

Betting Advice: Kansas is deserving of some home-court advantage, but many of the numbers are much too close to warrant laying 4.5 points. In what should be a tightly contested Big 12 matchup, go ahead and take the Longhorns at +4.5.

An easy out-of-conference schedule may be the only thing keeping the 9-0 Arkansas Razorbacks out of the AP Top 25 Poll, but you can guarantee a win over SEC opponent No. 12 Missouri will guarantee them a spot in the Top 20 next week.

The Razorbacks may not have played many tough opponents to date but they’ve done nothing short of dominate every team they’ve faced. They rank in the top ten in floor percentage, rebounding percentage, and block percentage while winning games by an average of 26.6 points. They also enter the game with an impressive 6-2 record against the spread.

Missouri will look to get back in the win column after dropping their SEC opener to Tennessee on Wednesday night. The Tigers have had issues defending teams who want to pound the ball down low as they rank 245th in the country in block percentage. A tighter defensive effort will be mandatory if they want to challenge Arkansas.

Betting Advice: While this may be the first true test for Arkansas, you can feel comfortable laying the 5.5 points on them. The way they’ve been dominating their opponents prove that they should be able to have similar success against their SEC opponents. Tennessee, who was another example of a team that didn’t have a tough out-of-conference schedule, handled Missouri with ease on Wednesday night and you can expect the Razorbacks to do the same.

If you’re looking to watch a game with a seemingly endless amount of points, look no further than the Big Ten matchup between No. 10 Iowa and No. 14 Rutgers. The Hawkeyes are averaging the third most amount of points per game in the country at 94.3 while the Scarlet Knights aren’t too far behind them at 80.6 points per game which is good for 40th among all teams.

Betting Advice: Don’t let the high total scare you either, as it was set at 170 when Iowa played Gonzaga and it still surpassed that number by 17 points. The OVER is a combined 14-4 between these two teams heading into Saturday so now’s not a good time to overthink a bet. Take the OVER and enjoy what should be a high-scoring affair.

The battle of Virginia is set to take place late-Saturday afternoon when the No. 24 Virginia Tech Hokies take on the No. 23 Virginia Cavaliers. Despite entering the game as the No. 23 ranked team in the country, Virginia has been one of the most disappointing teams so far this season.

Many people expected the last team to win a National Championship to be the cream of the crop of the ACC, but they haven’t looked close to the same Virginia team that we’ve seen in years passed.

Tony Bennett has been known as being one of the best defensive coaches in the country, but we’ve yet to see the stifling defense that we’ve come to expect from his squad. Teams are still averaging just 60.7 points against them, but that’s in large part due to the snail-like pace that Virginia plays at. Their opponent FG percentage this season sits at 40.7 percent, which still ranks among the top 100, but it isn’t close to their mark last season of 36.9 percent which was second in the country.

Virginia Tech, while not getting the respect that Virginia has, has played just as good on the defensive side of the court. The Hokies also have one strength that they can use to expose that biggest hole in Virginia’s defense, the three point shot. 43.1 percent of Virginia Tech’s shots come from beyond the arc, that’s the 62nd highest rate in the country. Meanwhile, 38.1 percent of points scored against the Cavaliers come from three point land, which is the 28th worst mark across all teams.

Betting Advice: The ability of Virginia Tech to be able to exploit Virginia’s biggest defensive weakness should be enough to back the Hokies.

Mike Krzyzewski shocked the college basketball world when he announced that Duke would be forgoing the rest of their out-of-conference schedule due to “safety” concerns. Many people believed Coach K wouldn’t have made that decision if the Blue Devils didn’t start their season at 2-2, but they’ve since got back in the win column after beating Notre Dame in their ACC opener. They now find themselves as underdogs when they take on No. 18 Florida State tomorrow.

Duke’s young squad may round into form once we get deeper into the season, but now is as good of a time as ever to fade the blue blood program. Duke has done very little well throughout their first five games including ranking 215th in the country in turnovers per possessions.

Betting Advice: Florida State, on the other hand, has played solid basketball throughout the start of the season. They rank in the top 100 in most key offensive and defensive statistics, with their only downfall being a large amount of fouls. They’re averaging 19.4 fouls per game but even if that issue persists on Saturday it shouldn’t be a cause for concern as Duke is hitting just 68.1 percent from the line which ranks 211th in the country. The Seminoles should get the job done as home favorites against an inexperienced Blue Devils squad.