An Unstoppable Force Meets an Immovable Object when No. 1 Gonzaga takes on No. 16 Virginia 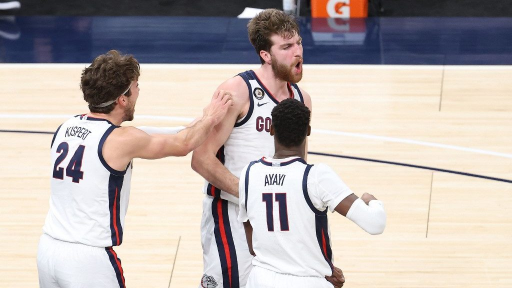 Gonzaga is set to play their final ranked opponent of the out of conference portion of their schedule on Saturday when they take on No. 16 Virginia. The Bulldogs have already bested three ranked teams this season including a 99-88 win over No. 3 Iowa last week.

Virginia enters the game having played just five games this season after having a handful of games cancelled earlier this month due to COVID-19 protocols.

The Bulldogs are set as 6.5-point favorites at FanDuel with the total set at 139.5

To further pad their resume of offensive prowess, they rank 3rd in Floor percent, scoring at least one point on 56.8 percent of their possessions. Their lowest scoring game of the season came against No. 11 West Virginia when they put up a “measly” 87 points. They’ve surpassed 90 points in each of their other five games.

If there’s any team that can slow down Gonzaga’s offense, it might just be the Virginia Cavaliers. The defending national champions have been known for their defensive abilities since Tony Bennet took over as the team’s head coach. So far this season they’re allowing the 4th fewest points per game at 54. They’re also 12th in the country in opponent shooting percentage, keeping teams to a FG percentage of just 36.3.

One knock against the Cavaliers this season is a lack of competition. Their only scheduled ranked opponent this season was Michigan State, but the game was cancelled due to COVID-19 protocols. Their only loss this season came to San Francisco, who beat them outright despite being set as a 15.5-point underdogs.

Despite being complete opposites as far as offensive and defensive numbers, Gonzaga and Virginia also have some similarities. Both teams have been great at rebounding so far this season, ranking 25th and 37th in rebounding percentage.

Neither team has found themselves in foul trouble either. They rank 12th and 32nd in fouls per defensive play. They also have similar numbers when shooting from beyond the arc. Virginia has been shooting 36.4 percent from 3-point land and Gonzaga isn’t far behind them with a 3-point FG percentage of 34.2.

Betting Advice for Gonzaga vs Virginia

While deciding between a top tier offensive team and a top tier defensive team may seem like a tough call, the Bulldogs have had a much tougher schedule to-date. They have two double-digit wins against opponents who are ranked in the top ten and haven’t been in danger of losing a game yet this season.

Despite their strong defensive play, Virginia has yet to face a challenging opponent and they have a loss on their record against an unranked San Francisco team. You have to trust the Bulldogs and their offense to get the job done until it’s proven that there’s a team out there that can slow them down.

It may seem like the obvious wager to make, but sticking to betting on the number 1 ranked team in the country is the smart move to make.