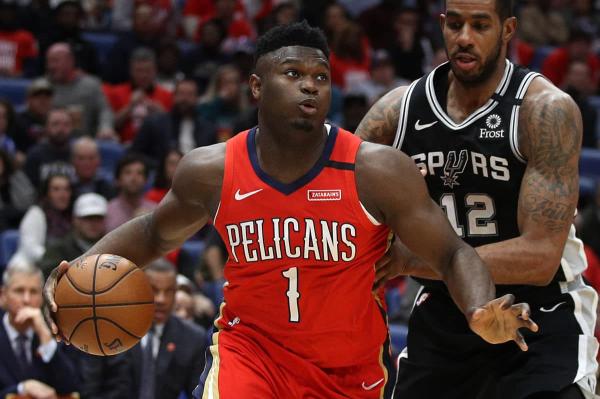 The New Orleans Pelicans fell to the San Antonio Spurs by four on Wednesday evening, but Pelicans fans saw everything they needed to in Zion Williamson’s debut to call him the next NBA superstar.

Williamson showed his athleticism with a huge leap over a Spurs player to grab a rebound, showed his control by laying in an alley-oop, and showed his range by going 4-for-4 from behind the three-point line.

Most importantly, by scoring 17 consecutive points in a fourth-quarter rally that brought the Pelicans level with the Spurs and fans to their feet, Williamson showed that he’s ready to begin his conquest of the NBA.

In fact, Williamson was so good that coach Alvin Gentry was met with fans’ displeasure when he removed the rookie from the game with more than five minutes to play. Minutes later, the fans began chants of “We Want Zion!” while Brandon Ingram was shooting free throws.

Although Gentry and the Pelicans didn’t allow Williamson back on the floor as part of their process to gradually bring their star up to speed after injury, it was a successful debut for the highly touted talent from Duke.

New Orleans lost by a score of 121-117, but Williamson finished with a team-high 22 points (tied with Ingram), seven rebounds, and three assists on a very efficient shooting performance in which he missed just three of his 15 shots.

The vast majority of players to come through the NBA can only dream about dropping 17 straight points in a fourth quarter. Williamson did it all over a span of a few minutes while turning a double-digit deficit into a New Orleans lead.

Zion looked like the best player in the Smoothie King Center for a significant stretch of the contest, and he certainly didn’t look like a rookie making his NBA debut while doing it.

The fourth-quarter eruption began with a wide-open three from the top of the key. Williamson then finished at the rim after catching a lob above LaMarcus Aldridge before hitting another three from the same spot.

After fighting through bodies for a putback layup, Williamson then hit another pair of big shots from beyond the arc.

When the dust settled, Zion’s miniature showcase handed the Pelicans a 107-106 lead.

Although Williamson’s night was done at that point, he showed the world why he’s still a legitimate Rookie of the Year candidate without having played a single game before Wednesday night.

Right now, Williamson and his +800 odds to win the award trail only the -250 odds of Memphis’ Ja Morant.

Can Zion Lead New Orleans To The Playoffs?

After a performance like Zion put on, it’s only natural for fans to begin looking ahead to where this team might be able to go and what they could accomplish. However, the Pelicans face a tall task in getting themselves into one of the top eight spots in a crowded lower half of the Western Conference.

At this point, New Orleans sits on a record of 17-28 and trails the Spurs, who own the eighth seed, by four games. The bigger obstacle is that three other teams – Memphis, Portland, and Phoenix – all stand between the Pelicans and Spurs.

However, New Orleans has picked up its play as a team by winning 11 of its last 17 games. Now, if Zion is able to consistently offer up bursts like the one he gave his team in the fourth quarter on Wednesday, the Pelicans have a chance to bypass the four teams keeping them from a playoff spot.

Yet Vegas doesn’t view New Orleans as a team with any sort of chance to contend in the Western Conference. Right now, the Pelicans own odds of +13000 to win the conference, which puts them ahead of only Golden State (+25000) and Memphis (+25000).