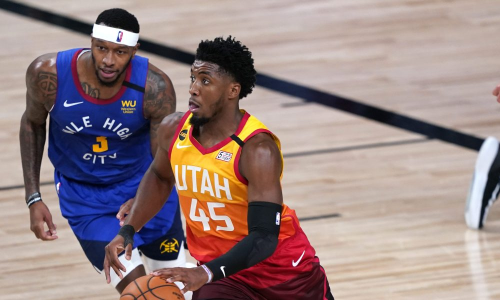 Thanks to Jamal Murray, the Denver Nuggets forced a Game 6 in their first-round matchup with the Utah Jazz. The Western Conference opponents continue their series at 4 p.m ET/1 p.m. PT on ESPN, with Utah trying to close out the series while Denver attempts to force a Game 7.

Unlike some of the NBA’s other postseason series, injuries have been a non-issue for the Jazz and Nuggets. That means the team that comes out on top Thursday will simply be the one that executes best.

The Jazz are 1.5-point favorites on DraftKings Sportsbook. The betting line is the same on FanDuel, which also lists the over/under total as 220.5 points.

Jamal Murray is on fire

It doesn’t matter where Murray’s been shooting from on the floor – it feels like every time he puts a shot up, it’s going in. In Game 4, Murray finished with 50 points on 18-for-31 shooting, and he followed that up with another 42 points on 17-for-26 shooting in Game 5.

Down the stretch of games, it’s been all Murray-Nikola Jokic pick-and-rolls for Denver, and it’s gotten them back into this series. Utah attempted to contain Murray in Game 5 by putting their top perimeter defender, Royce O’Neal, on him. Even in the possessions where that worked, it allowed the much taller Denver team to outrebound 45-40 despite shooting a better percentage from the field and at the foul line.

Denver will continue to need Murray to light it up in Game 6 if it hopes to advance. Nikola Jokic started Game 5 by making his first eight shots, but Rudy Gobert has proven a tough matchup for the Joker, as expected. The Nuggets’ hopes of staying alive will rest on Murray’s shoulders to continue hoisting shots.

Can Donovan Mitchell keep up?

Utah’s star shooting guard, Mitchell, dropped 57 points in the series opener and matched Murray shot-for-shot in Game 4 with a 51-point outing. That meant his 30 points in Game 5 felt somehow underwhelming.

It’s hard to point at one metric entering a game that could determine the result, but with the way Mitchell and Murray have played, it could be this simple: Whichever top guard scores more will lead their team to victory.

The benefit Mitchell gets in that regard is the secondary ball-handlers that can set him up for easy looks. Both Mike Conley and Joe Ingles allow Mitchell to play off the ball at times, which both saves energy and forces a defense to defend varied looks. When Murray doesn’t have the ball, he’s usually looking for a handoff from Jokic – while effective, it’s an expected maneuver that repeats over and over.

After being forced to score so frequently the last few games, Murray’s heavy ball-handling and cutting load could start to affect his legs on his long-distance shots. Mitchell, at least to a small extent, should be fresher.

Murray’s due for some regression that won’t be immediately offset by increased Jokic production due to the matchup with Gobert. That leaves Mitchell to leapfrog Murray in Game 6 scoring, likely enough to push the Jazz to a series win.

With Utah (-1.5, -109) only expected to win by a small total, that’s a solid bet for a team that is rightly favored. If you’re looking for additional bets on this game, both Mitchell and Ingles’ point-total props on DraftKings are beatable.

Taking the over on Mitchell’s 30.5 points (-103) and Ingles’ 10.5 points (+101) are good secondary bets while believing in the Jazz on Thursday, and both could cash even if Denver ekes out a win.

Tonight, two pitchers whose records could use a little polishing match up as the St. Louis Cardinals welcome the Miami Marlins to Busch Stadium to open a three-game series. Cardinals hurler Adam Wainwright has not picked up a win since May 20, while Pablo Lopez’s win in his most recent start last week was his END_OF_DOCUMENT_TOKEN_TO_BE_REPLACED