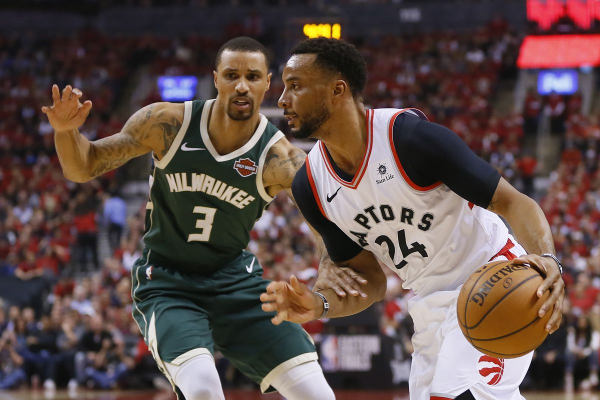 The Western Conference finals in the NBA have already wrapped up, but there is still plenty to determine in the East. The Milwaukee Bucks and Toronto Raptors came into the playoffs as the top two seeds, and they are in a tight battle for the right to take on the Golden State Warriors. Milwaukee dominated the first two games in this best-of-seven series, but the Raptors have responded with a pair of great performances in Games 3 and 4. This series has now turned into a best-of-three, and the Bucks have home-court advantage.

Milwaukee looked like the clear team to beat coming into this series after their dominant performance in the first two rounds. The Bucks swept the Detroit Pistons in the first round and then eliminated the Boston Celtics in just five games in round two. Toronto was impressive in their first-round win over the Orlando Magic, but they got a real test in the second round. It took the Raptors seven games to eliminate the Philadelphia 76ers. This series looks like it could go to seven games as well.

The Milwaukee Bucks are -7.0 point favorites over the Toronto Raptors in Game 5.

Raptors Bench Will Be a Key

Raptors head coach Nick Nurse has really shortened his bench throughout this playoff run, but his reserves stepped up in a big way in Game 4. Toronto got a whopping 48 points from a trio of reserves in that win, and they outplayed the Bucks’ bench for the first time in the series. Norman Powell, Serge Ibaka, and Fred VanVleet were all +24 or better in Game 4, and they could be a real difference maker if they can keep up this kind of play.

Kawhi Leonard had another terrific game for the Raptors in their Game 4 win, but he actually had some help for a change. Leonard is averaging over 32 points per game in the postseason but scored just 19 in Game 4. The Raptors have ridden on his shoulders all playoffs, and they are now asking him to defend at a high level as well. Point guard Kyle Lowry busted out of his shooting slump to lead the team with 25 points in Game 4. Lowry and Leonard must find a way to keep making big plays as the series shifts to Milwaukee.

The Milwaukee Bucks have a pair of All-Stars leading them, and these two players will need to be huge in Game 5. Forward Khris Middleton poured in a game-high 30 points in the Game 4 loss and has been a great second option for the Bucks all season long. Middleton shot 11-15 from the floor in that game and should continue to get great looks. Toronto has been throwing extra defenders at Giannis Antetokounmpo all series long, and it has started to work. Even though the “Greek Freak” had 25 points in Game 4, he was held to just 37 in the two games combined in Toronto.

The Bucks had been getting great production from their bench in this series, but that wasn’t the case in Game 4. Milwaukee got just 23 points from their bench in the loss, and their second unit really struggled to knock down shots. Malcolm Brogdon and George Hill were great in Game 3 but were a combined -27 in the Game 4 loss. Milwaukee is going to need their second unit to perform in this game.

Toronto bounced back in a big way at home, but things haven’t always been easy for them on the road. The Raptors haven’t been getting consistent play from anyone besides Kawhi Leonard, and that could hurt them in this game. Milwaukee is the most explosive team in the NBA, and their offense will be too much in this game. Bet the Milwaukee Bucks -7.0 over the Toronto Raptors in Game 5.