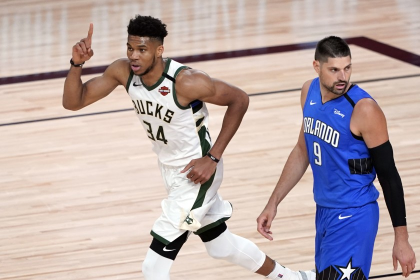 The NBA Eastern Conference semifinals are underway and feature an intense match-up between the Miami Heat and Milwaukee Bucks.

For all fans, game 1 was a shocking upset for the Bucks. Granted the Bucks lost Game 1 in the first round too, the Heat are a substantially better team. However, the Bucks were without Eric Bledsoe.

In game 1, the Heat dominated by scoring in the paint and getting substantially more rebounds. The Heat were also excellent at the free-throw line as well. Impressively, the Bucks were better from three-point range and had a higher field goal percentage.

The consensus by many analysts is that the Heat’s defense and the outstanding play of Jimmy Butler won game 1 for the Heat. Butler scored a playoff career-high of 40 points in only 36 minutes of play and the Heat managed to hold Giannis to only 18 points. Giannis was still very effective on the defensive end of the court and was one assist short of a triple-double. However, the Bucks needed more offense from Giannis in such a tight game.

Notably, Butler’s supporting cast fared worse in game 1 than Gianni’s teammates. Outside of Butler, the remaining 8 Heat players only scored 75 points. However, outside of Giannis, the Bucks remaining 9 players scored 86 points in game 1. When analyzing the depth of their roster, the Heat are considerably better at the shooting and point guard positions. Without Bledsoe, it is going to be difficult for them to win the series.

However, the Bucks had numerous opportunities to win game 1. Most notably, Giannis only attempted 12 field goals for the game and the Bucks were 53.8% from the free-throw line. The rest of the Bucks roster had a relatively decent game. Brook Lopez even had 24 points. In round 1, Giannis averaged 20 field goal attempts per game. Giannis was not getting good scoring opportunities in game 1.

Largely, the Heat’s defensive strategy on Giannis was critical for them winning game 1. This is similar to what happened in the 2019 playoffs in the Bucks series with the Toronto Raptors. The key to the Heat winning this series has to be stopping Giannis from scoring. The Raptors were able to effectively defend Giannis for four straight games. However, whether or not the Heat can replicate their performance for the rest of the series is questionable.

Giannis will undoubtedly average more than 18 points for the series. In the first series of the playoffs, Giannis averaged 30.6 PPG and 16.0 RPG while only playing 31.6 minutes per game. If Giannis has similar performances for the rest of the series, the Bucks will undoubtedly win and proceed to the Eastern Conference Finals.

DraftKings has the point spread in favor of the Bucks(-4.5) for game 2. As many fans would agree, the Bucks should come back determined to win game 2 and will likely cover the spread. For a straight moneyline bet, Draftkings has the Bucks(-195) favored over the heat (+163). The over/under for total points has been set by Draftkings at 221.5.

The Milwaukee Bucks are the clear pick for game 2 and likely will win the series as well.

Tonight, two pitchers whose records could use a little polishing match up as the St. Louis Cardinals welcome the Miami Marlins to Busch Stadium to open a three-game series. Cardinals hurler Adam Wainwright has not picked up a win since May 20, while Pablo Lopez’s win in his most recent start last week was his END_OF_DOCUMENT_TOKEN_TO_BE_REPLACED