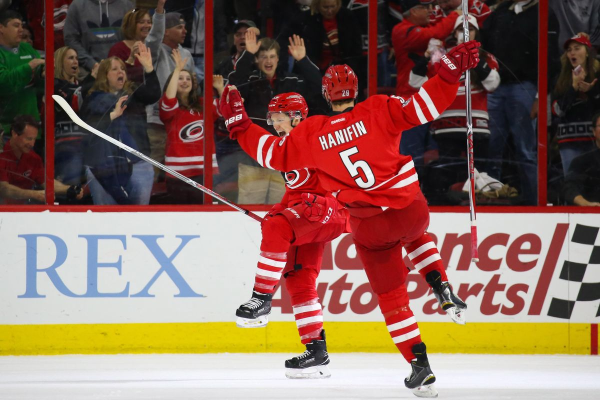 The defending champion Capitals are off to a good start in their quest to go back-to-back. Washington took care of business in both games at home, and now go on the road in firm control of the series.

But the series is far from over, and the Hurricanes would love nothing more than to come within one game of the Caps and to really put the pressure on. And if there’s a time to do it, it’s when the series shifts to Carolina.

Here’s a brief recap of the series thus far, followed by some keys for each team to win Game 3.

The Capitals opened up their title defense with a three-goal first period, setting the tone for a 4-2 victory in Game 1. Game 2 was much tighter, and overtime was needed to settle the score. But less than two minutes into extra time, defenseman Brooks Orpik scored the game-winner to win Game 2 for Washington.

Although Washington has won both games this series, they have been badly beaten in terms of possession. During even-strength play, the Hurricanes have controlled the puck 62.2% of the time, compared to just 37.8% for the Capitals.

The Caps have obviously taken advantage of their limited opportunities, scoring four of their five even-strength goals on rush plays. But if Carolina ups forecheck pressure and limits their fast play through the neutral zone, Washington will need to improve their passing and control the puck.

Another key for Washington will be their power play. After converting on their first two power plays of the series, they have failed on their last six chances, including one that lasted over four minutes in Game 2. Going into a road arena, the Capitals will need to find their power play success in order to keep momentum and take command of the series.

The Hurricanes are about to have their first home playoff game in 10 years, so of course the arena will be loud and crazy. But nothing would drain the energy out of the arena faster than if the Capitals got out to an early lead once again.

So far, the Caps jumped out to a 3-0 lead in the first period of Game 1, then a 2-0 first period lead in Game 2. Even though Carolina was able to get going late in each game, avoiding playing from behind will be critical to beat Washington. This season, the Capitals were 33-9-1 when scoring first.

Washington has gotten a ton of success from their first line of Alex Ovechkin, Nicklas Backstrom, and Tom Wilson, with the trio combining for nine points in two games. But the difference has been the domination of the second line versus that of Carolina. Washington’s second line of Evgeny Kuzvetsov, T.J. Oshie, and Jakub Vrana have combined for five points, compared to the one lone point earned by Jordan Staal, Teuvo Teravainen, and Micheal Ferland. If Carolina has any hope to win Game 3 and beyond, their second line needs to pick up the production.

Despite being down 2-0, the Hurricanes are favored -130 to win. It has not been a totally lopsided series thus far, and there’s reason to think if Carolina makes it a point to start the game on fire, while playing in front of their playoff-starved fans, they will be in good shape. I’ll take the Hurricanes -130 to come out on top in Game 3.