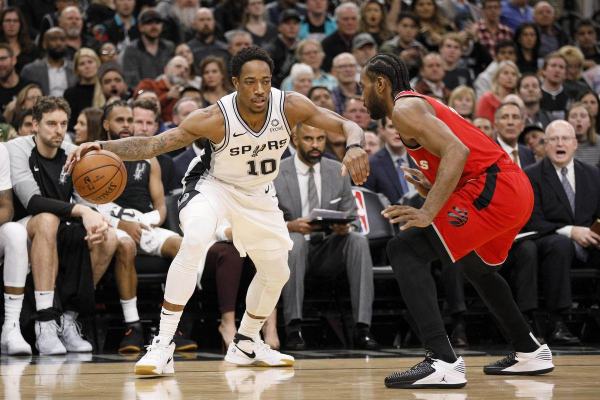 Russell Westbrook and the Oklahoma City Thunder travel to San Antonio to take on the Spurs tonight at 9:30 EST. This game consists of two teams with similar records that are both fighting to get into the upper-echelon of the Western Conference.

The Thunder come into this game as losers of their last 2, while the Spurs are on the second day of a back-to-back where they lost in Memphis last night. Neither of those statistics are really anything to write home about, but before those slip-ups, these teams had been on a roll. The Thunder were 4-1 in their 5 previous games and the Spurs were on a five game winning streak, which catapulted them each to the top end of the loaded Western Conference. I think that both of these teams will come into this national television game using this game as a litmus test. These are two teams playing at a high level that need to take a couple of games here and there to go out and see what they are made of in a high-intensity game.

San Antonio is 17-5 at home, which is another key aspect that should make this game interesting. For a long time, the Spurs were seen as the best home team in basketball. Without Kawhi, Tim Duncan, and Tony Parker, this notion has somewhat gone away. However, this team has won 10 of their last 11 home games. Who was the loss to? The mighty Bulls, of course.

The matchups are what make this game incredibly intriguing. I think that the Thunder roster is basically the worst possible matchup in the entire NBA for the Spurs. Maybe teams like the Warriors and Raptors can make an argument, but simply from a size and skill-set standpoint, this is rough for San Antonio.

The Spurs have 2 clear stars, Rudy Gay, and then everyone else. Now they are without Rudy Gay, so this turns into a 2-man show with the ancillary pieces just expected to play defense and make open shots. The Spurs have started Jakob Poeltl in place of Rudy Gay and then moved LaMarcus Aldridge down to the 4, but that hasn’t been that effective. Last game, when facing a pretty large frontcourt in Jaren Jackson Jr. and Marc Gasol, the Spurs attempted to start Poeltl, but he only played 13 minutes and Davis Bertans started the second half over him. I expect a similar situation in this game when they face Steven Adams. The issue is that I think both Jerami Grant and Steven Adams are bad matchups for Aldridge. To stop LMA, you want to either be significantly faster and more athletic or you want to be much bigger and stronger. These guys both possess one of those features, which should keep Aldridge in check in this game.

Demar DeRozan is also in a tough spot seeing Paul George on defense. George is an elite wing defender that really does pride himself on that side of the ball, unlike a lot of other stars. DeRozan’s ability to rise up and knock down contested mid-range jumpers may be the best in the NBA right now, but Paul George is going to be one of the worst matchups for him. The issue with projecting DeRozan to struggle with a defensive assignment is just that he is a streaky player at times. He could be covered by 3 guys on a 15-footer and knock it down with ease in some games. This is a worse matchup than most for DeRozan, but that doesn’t mean he can’t still get his.

The line on this game is OKC (-1.5) and I think that the matchup issues really show in that line. Of the 5 best players in the game, I believe that the 3 from OKC are all in better individual spots that the 2 from San Antonio. If that does come to fruition in this game, I think that the Spurs will really struggle to score throughout points of the game and that is what forces me to take the Thunder (-1.5) in this matchup.