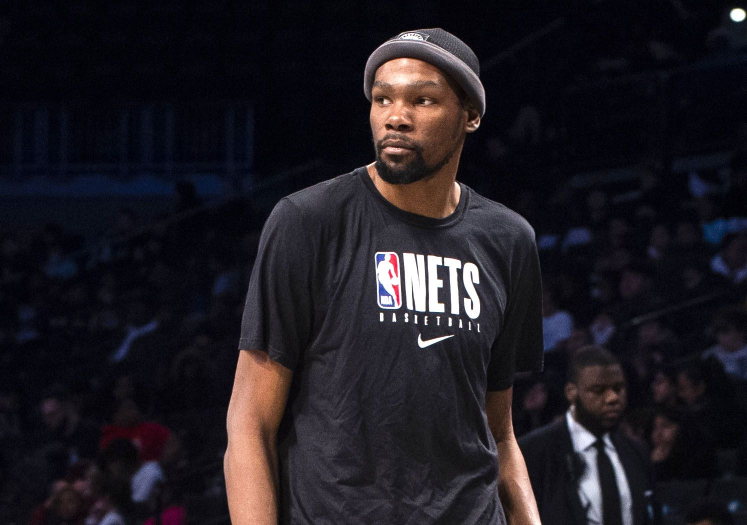 The fans of 29 NBA teams are wondering whether or not the sport will be able to finish out the 2019-20 campaign. The fans of the Brooklyn Nets are wondering if they’ll be legitimate title contenders when the season resumes.

According to Nets general manager Sean Marks, the door isn’t 100% shut on Kevin Durant being able to make a late-summer return after suffering a ruptured Achilles tendon in the NBA Finals last June.

Marks and the rest of the Nets organization have repeatedly said Durant will miss the entirety of this season, but the suspension of play and potential for holding the playoffs in July, August, or beyond could allow for Durant’s injury to fully heal in time for his comeback.

When asked about the possibility of Durant’s return, Marks said, “That’s a $110 million question.”

Marks went on to say of Durant, “He knows his body better than anybody. Our performance team and training staff have done a tremendous job getting him to this point, but I just don’t know how coming out of this pandemic will affect anybody, let alone Kevin.”

Durant tested positive for COVID-19 along with three Brooklyn teammates earlier this year but said he wasn’t feeling any symptoms at the time.

Last offseason, the Nets won free agency by luring both Durant and Kyrie Irving to Brooklyn. At the time, considering Durant was just coming off his Achilles injury, the idea was for the Nets to compete for championships starting with the 2020-21 season.

Despite owning a record of 30-34, the Nets currently sit seventh in the Eastern Conference. If the playoffs were to start tomorrow, Brooklyn would enter a first-round matchup against Toronto — the opponent against which he suffered his injury in the Finals.

While the 46-18 Raptors have played well enough to earn the conference’s second seed, the new-look Nets could feature a team led by Durant and Irving, although Irving’s return is also in question.

Brooklyn has earned its current playoff position in large part due to the play of Spencer Dinwiddie, who’s averaging 20.6 points and 6.8 assists per game. Caris LeVert has added another 17.7 points per game.

Would Nets Be A Title Contender?

There’s a long way to go before Brooklyn can be considered a true contender.

First, the NBA needs to structure a return to the season. Second, Durant (and Irving) need to be healthy enough to play. Third, Brooklyn will need enough practice time to gel, seeing as how they’ve yet to play with Durant and have hardly had Irving on the court.

If all of the above is able to happen and we see high-quality versions of both Durant and Irving, only then will we be able to call Brooklyn a title contender. Still, they’ll have to get by a strong Toronto team in the first round.

With all of that said, the Nets are beginning to edge up the list of betting favorites to win this season’s NBA Finals. With odds of +6000, Brooklyn sits 12th among all NBA teams.

And the Nets are well behind the top-ranked Eastern Conference contender, Milwaukee, which owns NBA-best odds of +240 to win the NBA Finals. A three-team race at the top also features the Lakers (+270) and Clippers (+340).