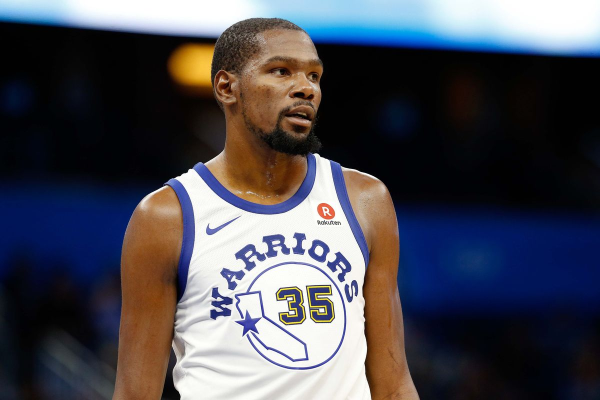 The Western Conference has been the powerhouse league for, I don’t know, twenty years now. It has been and remains stacked with the better teams, the better players, the better coaches, the better concession stands. One of the reasons Lebron has been so successful this past decade is because he played in the East. No one likes to talk about it but it’s the truth. And that’s not a knock on him, that’s a knock on the East. Getting to all those Finals is great and all but losing more than he won is rather tell-tale. The West is a deep conference so, what does Lebron’s arrival mean to the hyper-competitive West? While only time will tell, we should still check in with the oddsmakers just to see who is the favorite to earn the right to beat up on the East in next year’s NBA Finals.

Obviously, we start with these guys. Last year’s champions only improved themselves on paper this off-season so the -220 number only makes sense. Everyone knew KevinDurant was going to resign so that was not a shocker. But then they surprised everyone by picking up Boogie Cousins on a one year deal. The rich just get richer it seems. However, for your consideration, I have another reason for you to avoid this bet beyond the lackluster odds. This team is getting tired. They’ve been in the last four Finals and won three of them. That’s after slogging through the Western Conference Playoffs. This team is going to age quickly over the next few years and they may become a victim of their own success.

This Rockets team had the Finals in their sites last year with a big three games to two lead over the Warriors but they just couldn’t finish the job. Chris Paul’s ankle injury was probably their undoing so this team didn’t really need to add much in the off-season. That said, they still have managed to take a step backward. The loss of starter Trevor Ariza and bench bad-ass Luc Richard Mbah a Moute leaves a big hole. However, a Carmelo Anthony signing is imminent and that will right the ship, right? No. What made Ariza and Mbah a Moute so important was their perimeter defense and that is one of many things Carmelo does not bring to the table. This team somehow got worse after adding a future Hall of Famer, figure that out.

Well, well, well… I can’t believe I’m about to say this but the Los Angeles Lakers are the best value future bet in the Western Conference. That’s right, it’s got to be one of these top three and they are it. It’s Lebron, actually. Basically, adding this guy to the West is the best thing that can happen to the NBA. Let it be known that I’m far from a Lebron fan, a Lebron hater, and/or a Lebron apologist. He’s just that good and a team that makes this much of a jump forward while everyone takes a step back can not be overlooked. The Lakers are basically last year’s Cavs but they have the best player in the world. Lebron James at plus +1000 just to get to the Finals? That’s worth a dollar or two…

The Thunder are coming in at a close second as far as a valuable future bet and it does have more to do than the +2500. The Thunder went well out of their way to drop Carmelo like a bag of dirt and they’ll improve tenfold because of it. Plus, we get Year Two of Paul George playing alongside Russell Westbrook. George choosing OKC over LA is a very big sign. “Hey, Paul George. Do you want to play with the best player in the world in one of the best cities in the world for one of the best franchises in the world?” “No.” That requires as much guts as it lacks sense. But it means something. And then consider the number +2500. This team lost in the first round last year, lost Carmelo Anthony, yet sites as the fourth best odds. If George’s decision doesn’t convince you, maybe the oddsmakers will.