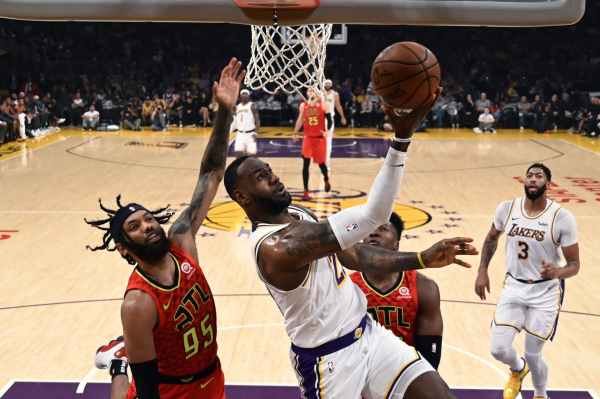 Tuesday night features a Western Conference matchup as the Oklahoma City Thunder (5-8) travel to the Staples Center to take on the Los Angeles Lakers (11-2). Although it is entirely too early to be watching the standings, the Lakers currently sit atop the Western Conference ranks, while the Thunder sit in a tie for 10th. Tipoff for this one is scheduled for 10:30 pm ET.

The Oklahoma City Thunder are 3-4 in their last seven games. They played just Monday night against the Staples Center’s other tenant, the LA Clippers, falling by just two points. For a team that lost most of its top-end talent during the offseason, the Thunder are still getting major contributions from players like Chris Paul, Danilo Gallinari and Shai Gilgeous-Alexander.

The Los Angeles Lakers have won four games in a row since their last loss on Nov. 10 against the Toronto Raptors. Since then, they have beat the Suns, Warriors, Kings and Hawks. The Lakers are led by the two-headed monster of LeBron James and Anthony Davis while also getting decent contributions from some of their bench players. The Lakers will look to continue their successful start to the season against the Thunder on Tuesday.

In the matchup, the Los Angeles Lakers are currently a whopping 9.5-point favorite playing at home. The moneyline for this one features the Thunder +360 and the Lakers -500.

Despite their success, the Los Angeles Lakers are really just in the middle of the pack when it comes to scoring. They currently rank 15th overall, averaging 110.8 points per game (109.4 at home). It is still better than the Oklahoma City Thunder, though, as they are 21st overall in scoring, averaging 107.1 points (101 on the road).

On the defensive side, both of these have been top-10 teams in terms of scoring defense. The Lakers currently rank second in the league, allowing opponents to score just 100.6 points per game (95.4 at home). The Thunder come in 10th overall, allowing an average of 107.1 points per game (112 on the road).

The Oklahoma City Thunder made waves around the league when they made a series of trades unloading star players like Russell Westbrook and Paul George this offseason. Still, the Thunder have some talent and are quietly a dangerous team. The Thunder are led by Paul, a former All-Star guard who was acquired as part of the Westbrook deal with the Houston Rockets. On the season, Paul is averaging 16.3 points, on 45.9% shooting as well as four rebounds and 5.4 assists per game over 12 games.

Paul is not the leading scorer for the Thunder, though. Gilgeous-Alexander holds that distinction, as he is averaging 20.4 points per game on 46.2 percent shooting. He also is adding 5.5 rebounds and 3.1 assists per game.

If you wanted to build a winning team around two superstars in the NBA, many people might point to James and Davis as two of the most likely players to go to. To say that the two-headed monster of James and Davis has been working thus far would be an understatement. James, who is arguably one of the greatest to ever play the game, has put up solid numbers again this year as he is averaging 25 points on 49 percent shooting. He is also averaging 7.6 rebounds per game and a whopping 11.2 assists per game.

Davis has been equally as impressive, averaging 24.5 points per game on 47.5 percent shooting. In addition to the scoring presence, he is averaging 9.2 rebounds, 3.3 assists and 1.2 steals per game. If they keep up this level of production and cohesiveness, the Lakers will be tough to beat.

While these two have been dominant, others have been elevating their games around the duo, as well. Kyle Kuzma (14 points, 4.3 rebounds), Danny Green (8.8 points, 3.1 rebounds, 1.4 steals), Avery Bradley (9.6 points, 3.2 rebounds), Dwight Howard (seven points, 7.7 rebounds), and JaVale McGee (6.9 points, six rebounds) have all been solid for the Lakers.

Take The Lakers At Home

I really went back and forth as 9.5 points is a lot to spot any team in the NBA, especially one that ranks in the top-10 in defense. Still, it came down to home/road trends early in the season for me. Thus far, the Lakers are 7-1 at home, while the Thunder have struggled away from Oklahoma City thus far, going 0-5 on the road. Additionally, the Lakers are 6-2 against the spread at home while the Thunder are 2-2 against the spread on the road.

Long story short, I wouldn’t blame you if you took the gamble on the Thunder, but for my money, I am taking James, Davis and the Lakers at home despite laying the 9.5 points.