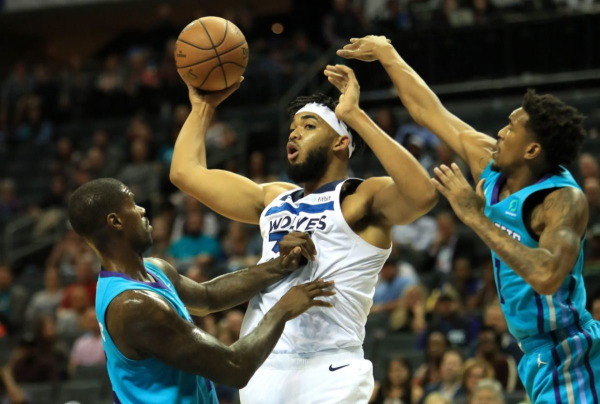 The Minnesota Timberwolves are headed to the City of Brotherly Love to take on Joel Embiid and the Philadelphia 76ers in a matchup between two of the remaining undefeated teams left in the NBA. The 76ers are currently 7.5-point favorites, and the total is 224.5.

The 76ers defense should be selling out to stop Towns from even touching the ball, and I do think that they will provide a major challenge to him with their length. The 76ers starting lineup is one of the bigger starting lineups in NBA history with 6-10 Ben Simmons at point guard and no one under 6-6 in the starting five.

This doesn’t even mention that Embiid and Al Horford are two of the better low-post defenders in the league, and they will both be on the court defending Towns throughout the game. I expect both of those guys to pay a lot of attention to Towns in this game.

Last season, Towns really struggled against the 76ers in two losses. In one game with Embiid playing, Towns had just 13, three and two in a blowout loss. Embiid was out for the other matchup, but KAT still only posted 21 and seven in a nine-point loss. This does not project well for Towns tonight.

This means that someone else will need to step up for the Timberwolves. This person will likely have to be Andrew Wiggins, who has taken 20 shots per game through the first three games and may get even more than that in this one due to the defensive pressure on KAT.

The other thing I would like to see Minnesota do here is get another shooter on the court, which may mean having Jake Layman start at the 3 over Treveon Graham. Towns should draw a lot of double-teams and defensive attention, and I would expect to see shooters get open on Minnesota. This issue is that Robert Covington, Wiggins and Jeff Teague are not elite spot-up shooters, and I think Layman may be their best chance to get hot from beyond the arc.

For the 76ers, I expect to see them operate pretty smoothly in this game as the T-Wolves don’t provide a ton of matchup problems on that end of the court. While Covington is seen as a great defender, he will not appear to be one against someone like Horford, who I guess he will match up against a decent amount at the 4.

If I were the T-Wolves, I would also consider running big to a certain degree to be able to get Covington onto Tobias Harris and then get a second big onto Horford. The issue is that I have not really seen them do this so far, and I cannot really project it to happen until I see it. I would prefer the T-Wolves more as a team if they change their starting lineup to Noah Vonleh or Layman instead of Graham for the matchup.

The 76ers are rather large favorites for a matchup between two 3-0 teams, but I am still going to ride them out as the play here at -7.5. The 76ers defense should be able to suffocate Towns and really stifle the offense in this matchup, which should be the key to a big win in Philly. I’m taking the 76ers -7.5.