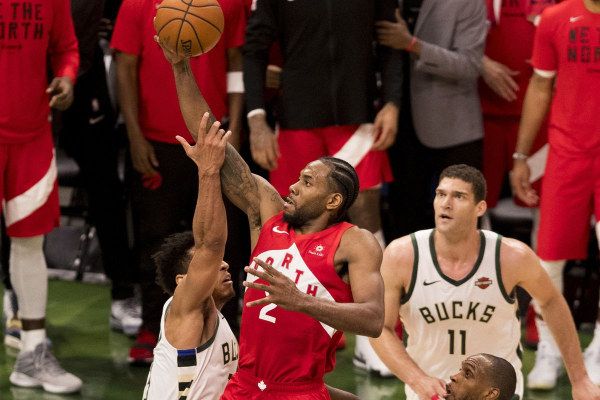 History will be made in Toronto Thursday night when the Raptors host their first-ever NBA Finals game. As a result of their tremendous performance in these playoffs, renowned band Twenty One Pilots had to cancel their show, which could have happened last night. But fans of basketball in the six are thrilled, as they should be. They will finally be playing basketball in June!

We have not seen too much recent success from the Blue Jays, and even having eight Canadian teams has not helped the country produce any NHL titles. Kawhi Leonard and his wrecking ball-sized hands have helped Toronto to make it to the big stage for the first time ever. The series with Orlando was a cakewalk, while they took down Philly in a wild seventh game on Leonard’s historic series-ending buzzer-beater. They fell behind 0-2 against the Bucks before winning the next four games, including a pivotal Game 5 on Milwaukee’s home floor.

We now know that the Drake Curse has been temporarily suspended. If anybody does not know about the curse; basically, this is just whenever the famed rapper wears a shirt/jersey of a player, that team always loses in must-win scenarios. He has long been the global ambassador for these Raptors, and you can find him in his courtside seat at every home playoff game. He can finally attend the Finals and support his team.

And this is the best thing possible for a 67-year-old superfan who has had season tickets since their first season, Nav Bhatia, who never misses a game. He has not missed a single home game in 25 years, and now he gets to attend the Finals.

Bigger than the fact that Toronto is playing in their first-ever Finals could be that the two best players (arguably) in this series could both wind up wearing different uniforms next season, We have not gotten any clues or hints into how Kawhi feels about Toronto, or what he might do after the season comes to its conclusion. But he helped his team get here, and for now, he is focusing on the task at hand. After it ends, we do not quite know what he may do, but it is bound to shake things up either way.

Golden State’s Kevin Durant, who became one of the most disliked players in the NBA after his decision to leave OKC to join the team that they blew a 3-1 lead to after 2015, could be on the move again. A chance to become loved again and lead a new team to the promised land is what presents itself for this summer.

As we’ve seen in the five games he’s missed, this team would not miss him too much should he depart, but it would put more pressure on the Splash Brothers, who could not have any poor performances excused or overlooked in his absence. They went 7-4 in the postseason with him in the lineup and have gone 5-0 in his absence, with a number of guys who hadn’t been asked much of stepping up.

This is a series in which Golden State should still be favored, but Toronto has a chance to make some history. With Kevin Durant out of the lineup, the defensive gameplan becomes far easier, and they can also put Kawhi Leonard on Stephen Curry, which could stifle a few of the Warriors’ plans on defense. Serge Ibaka at the 5 could very well be an option if Marc Gasol struggles against Draymond Green.

Some great basketball is about to begin folks, and one thing is for sure: Kawhi Leonard has not forgotten about 2017 when the Spurs had a massive lead on GS in Game 1 of the WCF. He is now healthy and ready to go. No Zaza to land in his airspace.