NBA Finals Game 4: Raptors Ahead But Warriors May Not Be Wounded Much Longer 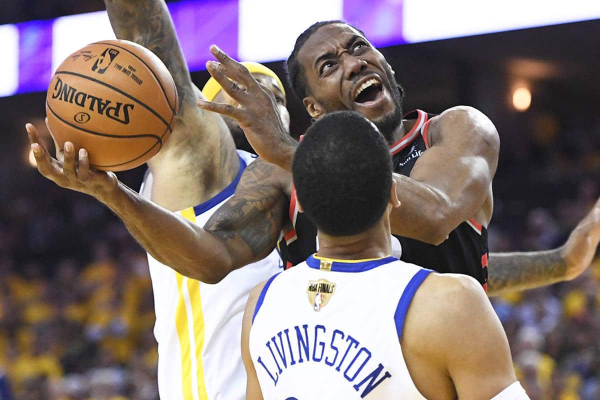 While Kawhi Leonard tends to get a lot of the glory when the Raptors have played well, Game 3 was an all-team affair, as the starting five for the Raps all scored in double digits and sixth-man guard Fred VanVleet also poured in 11 points to make it six Raps to put up double-figure scores.

Steph Curry put up the most prolific scoring game of his postseason career with a near triple-double performance of 47 points, eight rebounds, and seven assists. Without Kevin Durant and Klay Thompson, Curry’s incredible individual effort will be overshadowed by the fact that it came in a loss. Despite his outstanding scoring, it wasn’t enough to stop a disappointing upset loss to the 4.5-point road dog Raptors in a 123-109 affair that went decisively over the total.

Here are the factors that will play a role in deciding which wagers cash and which ones get torn to pieces for Game 4.

So far in the series, we have not had back-to-back victories by any team. Road teams are 2-1, both on the spread and straight up. If the Raptors can win Game 4, it would mark the first time a team was able to win two games in a row.

For bettors banking on the zig-zag trend continuing, wagering on the Warriors to take care of business might be a good wager, but beyond just betting the zig-zag effect, you’d also be betting that Golden State will be back at full strength.

The Warriors at full strength are head-and-shoulders above most other teams in the league from talent and scoring alone. With the Warriors without two of their top scorers, the Raptors were able to lay waste to them for a period of four quarters. While Curry and Durant tend to get all of the glory, Klay Thompson is arguably the team’s biggest X-factor as far as scoring is concerned.

In Golden State’s Game 2 victory, Thompson was absolutely unconscious from all areas of the floor, shooting 40 percent from three and shooting 10-17 overall for 25 points.

Coach Steve Kerr decided to sit Klay in Game 3 citing his long-term healing throughout the series being more critical than just him being available for one night of action. Aside from just getting Klay back, if the Warriors can put KD back on the floor, it would make them all the more lethal.

Rumors are swirling that Game 4 will be Durant’s first game back in action, and if so, it may be the reason behind a slight inflation on the line compared to Game 3. Opening as 5.5-point favorites (-225 on the moneyline) at home with a total of 216, it would be the series’ largest spread and largest total so far.

Series prices currently list the Raptors as slight favorites over the Warriors at -115, which would be the first time in recent years that Warriors were that low-priced in an NBA Finals series. Implied odds give the Raptors a 53-percent chance to win their first NBA finals in franchise history.