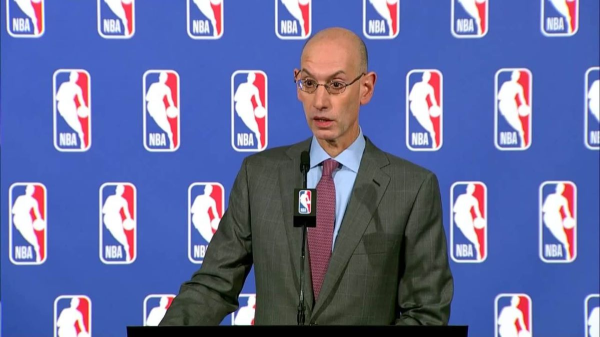 As the entirety of the sports world searches for ways to return to the field, court, and ice, the NBA is considering a 25-day program that would get individual players and teams ready for meaningful basketball should they receive an all-clear from federal officials.

This 25-day program would include 11 days of individual workouts in which players could undergo training and workouts while continuing to adhere to social distancing guidelines. The second half of the plan would consist of a two-week training camp.

This plan, which was born out of commissioner Adam Silver’s encouragement for all league employees to present ideas for a return, is currently facing pushback from league executives and medical personnel. Some people around the NBA feel a full month of preparation is needed before the sport’s return to avoid injuries after an extended layoff.

Either way, any plan to continue the NBA season will require a significantly improved situation regarding the coronavirus pandemic.

While MLB is considering a May return with all teams entering a sort of “bubble” within Arizona’s spring training facilities, the NBA is waiting until the same month before formally reassessing its shutdown.

At this time, there’s no specified date at which the NBA will cancel the remainder of the season if no plan is put in place.

As fans of the NBA grapple with life during the coronavirus pandemic, it can be easy to lose sight of where the league left off after suspending play in the middle of March. Let’s take a look at how teams currently stack up one month later.

In the Eastern Conference, the Bucks have a death grip on the top seed. With a record of 53-12, Giannis Antetokounmpo and company are at least 6.5 games ahead of every other team in the conference.

Despite the loss of Kawhi Leonard this past offseason, the defending champion Raptors have earned the second spot in the conference to this point. Toronto has accumulated a record of 46-18 with perfectly balanced records of 23-9 at home and on the road.

In the Western Conference, LeBron James’ Lakers sit atop the standings with a record of 49-14. They hold a 5.5-game lead over the cross-town rival Clippers, who sit second in the conference with a record of 44-20.

The Three-Team Race for NBA Glory

Should the NBA return to finish the 2019-20 season, many expect the league championship to go home with one of three teams.

The current favorite to win the NBA Finals is Milwaukee, which owns odds of +240. Following closely behind are the +270 Lakers. The third team staying in the race as a true contender is the +340 Clippers.

A significant gap in odds then picks back up with the +1200 Rockets. Another sharp gap leads to a group of six teams holding odds between +2000 and +2700, led by the Celtics.

This season has allowed for a breath of fresh air in NBA circles, as the dominant Warriors of yesteryear are no longer destined to meet up with the Eastern Conference’s offering in the Finals. Instead, it appears we’ll see whether it’s Giannis, LeBron, or Leonard who’s able to lead his team to glory.