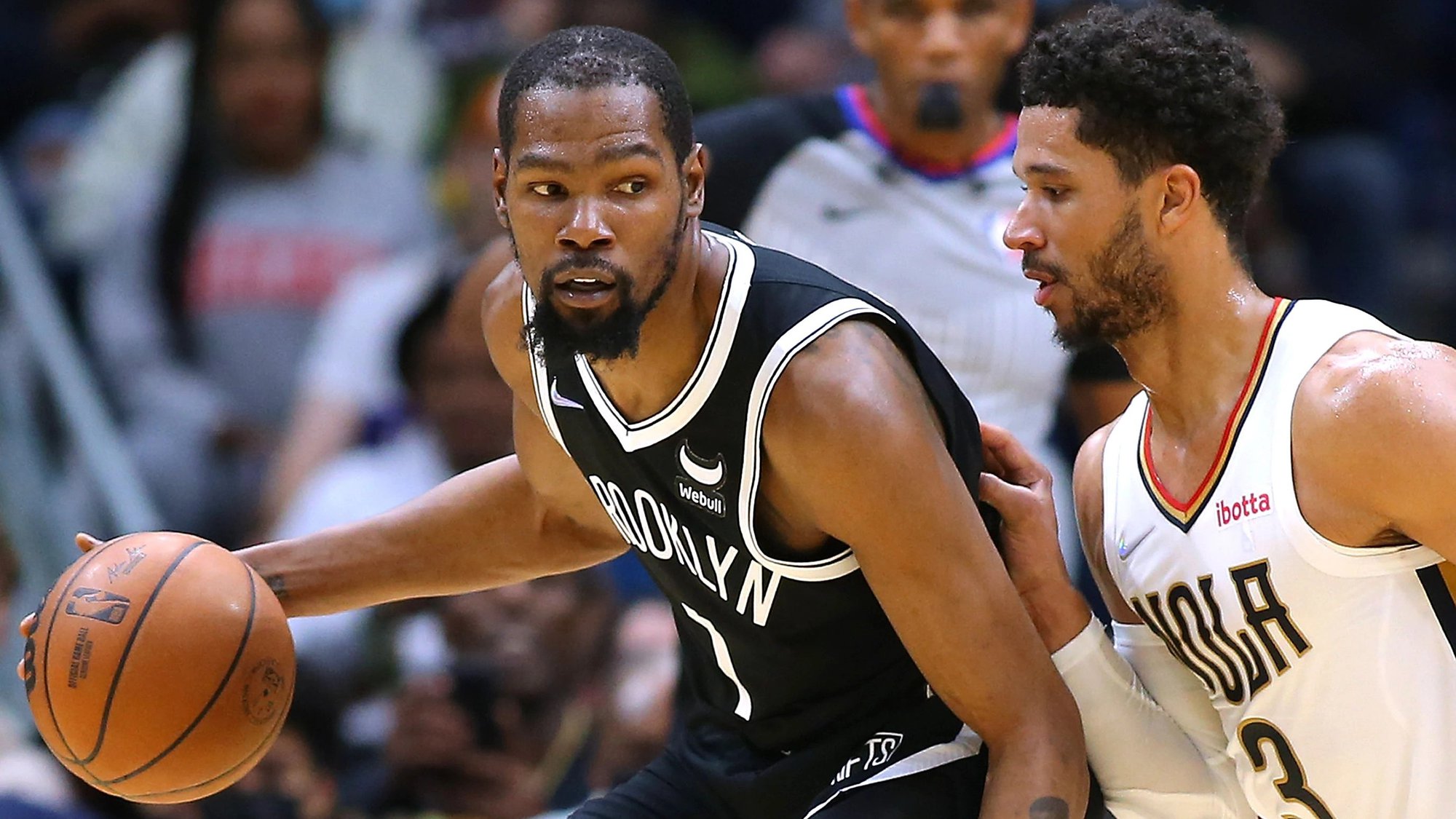 Mondays aren't a fun day for a lot of folks, but that is not the case for bettors. Along with some MNF action in the NFL, there are ten NBA games to look forward to tonight. Below, we take a look at tonight's card and offer our NBA betting recommendations.

NBA betting odds listed below are via FanDuel Sportsbook as of Monday, November 22, 2021 at 2:30 a.m. ET. To compare NBA betting odds from several top online sportsbooks, check out our NBA odds.

These two teams met last Wednesday at Barclays Center, with the Nets jumping out to a 21-point halftime lead on the way to a 109-99 win. That is actually the highest-scoring game for the Cavs–in output and game total–in their last six games.

Nets vs Cavaliers Best Bet: UNDER 208 – The total has gone up this morning, perhaps helped by Kevin Durant’s return after missing the Nets’ last game on Friday. Backing the under for a total this low might feel like a risk with the Nets, but it is the move. The under is 7-1 in the Cavs’ home games and 12-5 overall for the season, and it is 10-7 for the season in Nets games.

The Hornets beat the Wizards by 10 in Charlotte last Wednesday, but a different result is likely in tonight’s matchup. The Wizards are 7-1 ATS and SU at home thus far, with the lone ATS & SU loss coming against the Toronto Raptors. Last time out, the Wizards flipped fortunes at home against a team that just beat them on the road, downing the Heat on Saturday after a 15-point loss in Miami on Thursday.

Hornets vs Wizards Best Bet: Wizards to cover – The under here is also very tempting. The highest game total in any of the Wizards’ last nine games is 209, which has occurred twice (vs the Raptors and the Heat). But I like the hosts to continue their strong play at home and handle the Hornets. The Hornets started out 3-0 ATS and SU on the road but are a woeful 1-6 ATS and SU on the road since, with only one single-digit loss among the six straight-up losses.

The Hawks have found their form after losing seven of eight and come into tonight’s game with four straight wins. All four wins have been by double digits. The Thunder have held their own well against some tough opponents this season, and the first two games of their Eastern Conference road trip were single-digit losses to the Milwaukee Bucks and Boston Celtics.

Thunder vs Hawks Best Bet: Hawks to cover – The Hawks’ early struggles can mostly be attributed to being terrible on the road, where they are 1-8 ATS and SU. At home, they are 7-1 ATS and SU, and six of those straight up wins have been by double digits. They should dispatch the Thunder with ease.

Double-digit spreads aren’t for the faint of heart though, and this is a spot where I’d recommend buying down to -11 or even -10 if it makes you feel more secure.

Things are trending positively for the Celtics after their 2-5 start. They are 8-2 ATS and 7-3 SU in their last ten games, and they are 4-0 SU and 3-1 ATS in their last four home games. The Rockets are bad with a capital B-A-D, but they haven’t been blown out of the building with great frequency. They’re yet to record a road win, but they are 5-4-1 ATS on the road. Houston is also 5-2-1 ATS when they have been a double-digit dog.

Rockets vs Celtics Best Bet: Rockets to cover – Out of the games tonight with double-digit spreads, this would be the one I would most likely avoid. But as mentioned, the Rockets have fared well ATS when a double-digit dog. The Rockets lost by only 10 when these two teams met last month. They outscored the Celtics by 15 combined in the first and fourth but were outscored by 25 combined in the second and third.

The Bulls continued their fine start to the season with last night’s 109-103 win over the Knicks. A 37-point fourth quarter helped the Bulls get it done after they entered the final stanza down by a deuce. This is their third back-to-back of the season, and they are two for two so far. Both wins were by double digits, a 15-point home win over the Pistons and an 18-point road win over the Lakers.

Pacers vs Bulls Best Bet: Bulls to cover – The Pacers are not very good on the road, coming in at 2-9 SU and 4-7 ATS. At this point of the season, fatigue isn’t so much of a factor, especially when it is a home back-to-back. I expect a strong performance by the Bulls tonight.

The Bucks have used their current homestand to turn things in the right direction, winning three straight to move over .500. Their positive stretch should continue tonight against the Magic, who they defeated 117-108 on Saturday.

These two teams are rather familiar with one another, as this is their third meeting of the season. The first two games were split, a 96-89 Pelicans win and a 107-98 T’Wolves win. The visitors hit New Orleans sporting three straight wins, all by double digits.

As for the Pelicans, life without Zion Williamson continues to be a struggle. They had a nice win over the Clippers on Friday, but they followed it up by losing by 17 at Indiana the next night.

Timberwolves vs Pelicans Best Bet: Timberwolves to cover – Minnesota’s current surge may or may not mean anything for their long-term prospects. But in the short term, they are a lot of fun to watch, and they will come into this one with a lot of confidence. This is only their sixth road game of the season, but they have wins against the Bucks and Lakers and should have beaten the Grizzlies, who they torched by 43 at home on Saturday.

The Suns routed the MVP-less Nuggets yesterday by 29 for their 12th straight win. The quick turnaround and travel should not stand in their way of a baker’s dozen. The Spurs, who haven’t played since Thursday, have lost four straight games.

Suns vs Spurs Best Bet: Suns to cover – The Suns haven’t had a lot of close calls during their win streak, as ten of the 12 wins have been by five or more points. The Spurs aren’t exactly covering themselves in glory at the moment either. The closest loss in their current losing streak was an eight-point loss to the Lakers eight days ago. They have put in some good shifts against superior teams and likely won’t go down without a fight tonight. But if you can get the Suns at -5, don’t hesitate to make the move.

The Grizzlies continue to be alarmingly inconsistent and face the Jazz after being embarrassed by the Timberwolves last time out. Which version of the Grizzlies will we see tonight in SLC? Facing the Jazz on the road isn’t the ideal situation after getting lit up by the Timberwolves, and it is especially not the ideal situation when the Jazz have won their last three games by 35, 16, and 18.

Grizzlies vs Jazz Best Bet: Grizzlies to cover – Naturally the above means that the Grizzlies are going to cover or win outright tonight. It only makes sense.

The Sixers are still without Joel Embiid, who will miss his eighth straight game due to COVID. They have dropped six of the first seven to drop from top spot in the East to .500, but tonight’s game presents a favorable opportunity. The Kings have lost three straight and seven of eight. Saturday’s 123-105 loss proved to be Luke Walton’s final game as coach, as he was sent packing yesterday. Will interim coach Alvin Gentry be able to spark a turnaround?

76ers vs Kings Best Bet: OVER 222 – Other than a game against the Pistons, who are one of the worst defensive teams in the NBA, the Kings have not shot well from the perimeter recently. A little slump-busting could be in the cards tonight. In the Sixers’ last six games, opponents are shooting 41 percent from outside. Even if it doesn’t lead to a win, between them and the production that the Sixers should generate, the over should have no problem getting across the line.

Tonight, the most pivotal game of the 2022 NBA Eastern Conference finals takes place in Boston, with the Miami Heat taking a 2-1 series lead into their matchup with the Celtics. In Game 3 on Saturday, the Heat took control early, outscoring the Celtics 39-18 in the first quarter and leading by as many as END_OF_DOCUMENT_TOKEN_TO_BE_REPLACED