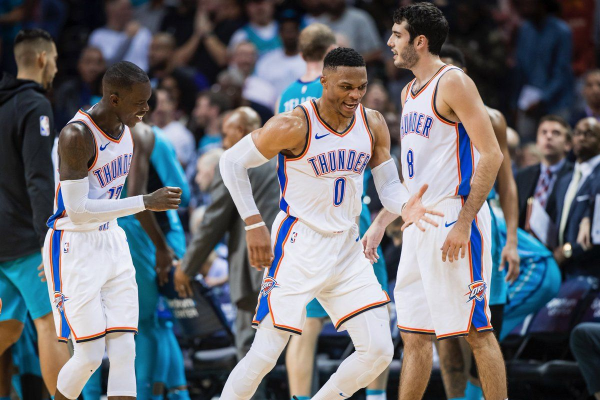 The Oklahoma City Thunder travel to the Staples Center to take on the LeBron-less Lakers. This is a homecoming game for both Russell Westbrook and Paul George, who are more or less from LA. Both players played their college ball in California after growing up there beforehand. Also, both of these players have been rumored to want to go back to Los Angeles at some point in their career, but that doesn’t seem likely in the near future.

The Lakers come into this game 2.5 games behind the Thunder and 2-2 in their last 4, but 3.5 of those games were without LeBron and another 3 without McGee and Rondo. Rondo and LeBron are both out for this game, but McGee came back in a limited fashion last game, so I expect him to play in this one. The Lakers have had the lead for long stretches in every game without LeBron, but they have struggled to stop the bleeding whenever the opponent goes on a late run to get back into the game. They led the Clippers most of the first 3 quarters but eventually allowed a 22-0 run to not only surrender a big lead but also put themselves in a large hole to climb out of.

The biggest problem the young Lakers have is really the coaching late in games from what I have seen. Early in games, they are a free-flowing, fast-paced team that loves transition points and passing the ball quickly. Late in the game, it turns into 80% Brandon Ingram iso-ball and 20% Kuzma iso-ball. Lonzo Ball mentioned this after each of their last 2 losses, but it doesn’t seem that there was really ever an adjustment made. I think the key for the Lakers in this game will be if they can stop the bleeding. Truthfully, these runs that have been given up are pretty random and are just the result of one guy getting hot and the Lakers missing shots. With LeBron, they can basically always get a basket if necessary. This does change the dynamic, but I don’t think this “choking” is going to continue.

The Thunder do not match up too well vs. the Lakers from a personnel standpoint. The Lakers biggest problem for multiple years has been scoring/shooting combo guards. Just recently, we have seen James Harden, Lou Williams, and Bogdan Bogdanovic have massive games vs. the Lakers. Earlier in the year, players like Demar DeRozan and Jimmy Butler also have monster games. This is the biggest issue with the Lakers, even though guys like Josh Hart and KCP are considered “good defenders.”

The Thunder’s 2-guards might as well not even be on the court offensively, which bodes well for the Lakers. Russell Westbrook is obviously incredibly talented, but this doesn’t project to be a good matchup from a defensive standpoint, but the pace will help neutralize that. Westbrook will be defended by Ball, who has elite length and hands for the position and the Lakers rim protection with Javale and Tyson Chandler is really solid. Paul George will likely see a lot of Brandon Ingram, which is a fine matchup for him. Ingram is long but isn’t great at moving as a defender. I expect Paul George to be the guy that the Thunder rely on all game to score the ball.

I think the line on this game is appropriate, but I think it is slightly too far in favor of the Thunder due to the overreaction to the Lakers losing 2 of 3 without LeBron. The Lakers have looked fantastic, considering they are without Lebron for about 120 of those 144 minutes. I believe that this game will be close, so give me the Lakers (+6) and the points at home.