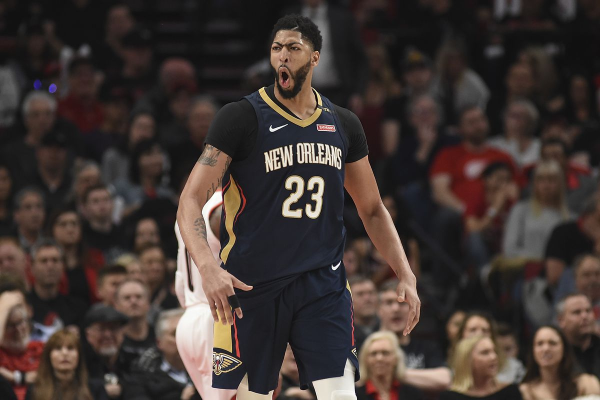 In an NBA climate where scoring is prevalent throughout the league, the Golden State Warriors have taken it to a whole new level.  In the last three games, they have had three leading scorers. That in itself is not all that remarkable until you taken into account that all three scored 41 or more (Steph Curry had 51 last Wednesday, Kevin Durant 41 on Friday, and Klay Thompson 52 on Monday).  When you take into account that aside from those three they still have Draymond Green, Andre Iguodala, and Shaun Livingston (oh, and Demarcus Cousins who will return later this season), it is no wonder that they are favorites to win the NBA title again this year.

For the New Orleans Pelicans, they are a team that is on the way up, led by unheralded superstar Anthony Davis. The two will match up on Halloween when the Pelicans (4-2) travel to Oracle Arena to take on the Warriors (7-1). Tipoff is scheduled for 10:30 pm ET.

The Warriors opened as 12.5-point favorites at home in this one with moneyline having them at -909 while the Pelicans are at +570.

Wednesday night’s game features the two best offenses when it comes to adjusted offensive rating (estimate of points scored per 100 possessions adjusted for strength of opponents defense).  The Warriors come in at 121.73 points while the Pelicans are at 118.75. When it comes to adjusted defensive ratings, they both fall in the middle of the pack, with the Warriors ranking 14that 110.77 and the Pelicans ranking 17th at 111.32.

Pelicans Success Will Depend On Health Of Davis

When Anthony Davis plays, the Pelicans are 4-0. When he doesn’t they are 0-2. Needless to say, the Pelicans rely heavily on their superstar big man.  Unfortunately, he has missed their last two games with a sprained right elbow and is questionable for Wednesday’s contest. In the four games that he has played, he is averaging 27.3 points, 13.3 rebounds and 4.8 assists per game.

Warriors Are Tough To Stop

As mentioned earlier, the Warriors’ offense is dynamic.  Even if you shut one person down, you have a couple others that can drop 40 points on you. They are also so dangerous because they can beat you from both inside and out.  Just ask the Chicago Bulls. Klay Thompson not only dropped 52 points on the Bulls, but he also set a record by hitting 14 3-pointers on the night. On the season, Thompson is averaging 19.8 points and 4.3 rebounds per game.

Decision Based Off Of Davis

12.5 points is a lot to spot any opposition, but if there is any team in the NBA that can do it and still win with ease it is the Warriors.  Still, the Pelicans have arguably one of the best offenses in the league early in the season and have a player in Anthony Davis who can dominate no matter the opponent. The big question will be whether his strained elbow allows him to play.  If he plays, I am taking New Orleans and the 12.5 points in this one. If he doesn’t, I am taking Golden State at -12.5 all day long.

Tonight’s NBA betting schedule is lacking in overly compelling matchups, but tonight’s action will also be taking place with a few notable names missing. Booker, Morant, and Lillard Sidelined Tonight and Beyond Booker Out Versus Pistons Due to Hamstring Injury The Phoenix Suns lost Devin Booker (hamstring) on Tuesday against Golden State but closed out END_OF_DOCUMENT_TOKEN_TO_BE_REPLACED