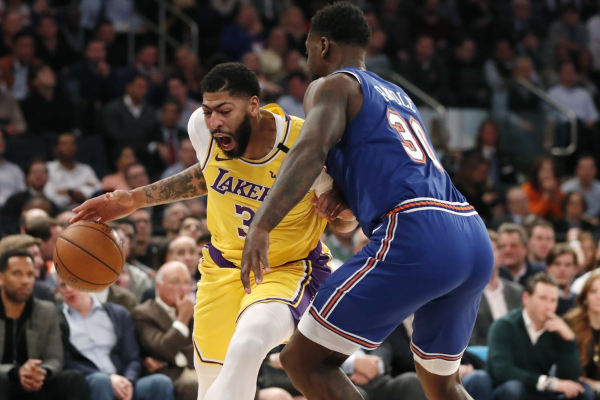 Thursday night features a battle of West versus East as the Los Angeles Lakers (35-9) travel to the Barclays Center to take on the Brooklyn Nets (18-24). If the season were to end right now, both of these teams would be playoff-bound.

The Lakers currently hold the top spot in the West with a comfortable four-game lead over the second-place Utah Jazz. In the Eastern Conference, the Nets sit in eighth place, 2.5 games in front of the Detroit Pistons. The Nets would love to play spoiler to the favored Lakers, especially playing on their home court. Tipoff is scheduled for 8 pm ET in this one.

This will actually be the second game of a back-to-back for the Lakers, as they beat the New York Knicks on Wednesday. In the win, LeBron James and Anthony Davis combined for 49 points, while Kentavious Caldwell-Pope chipped in 13. While it’s never easy to play back-to-back nights, the travel will at least be minimized as they go from New York to Brooklyn.

Unlike the Lakers, the Nets come into this one well-rested as they have not played since Monday, losing to the 76ers. In fact, the Nets are on a four-game skid. Their last win was a 108-86 win over the Atlanta Hawks on Jan. 12. The Nets will look to get back on track but will have a tall task on their hands welcoming in the Lakers.

The Lakers come into this one as 5.5-point favorites despite playing on the road.

Lakers Look To Keep It Rolling

The Lakers have been the best team in the Western Conference this year, if not the NBA, and this is in large part due to the dominance of James and Davis. James is averaging 25.2 points, 7.6 rebounds, 11 assists and 1.3 steals per game, while Davis is averaging 26.6 points, 9.3 rebounds, 3.2 assists, 1.5 steals and 2.6 blocks per game. It is hard to find a more fearsome duo in the league.

In the offseason, the Nets signed their own fearsome duo; however, only one of the two will be on the court this season. With Kevin Durant sidelined for the entire year, it has been just Kyrie Irving on the floor, and even his appearances have been intermittent at times this season.

Still, Irving is probable for Thursday and, when healthy, he can be dominant. This season he is averaging 26.5 points, 5.3 rebounds, 6.9 assists and 1.4 steals.

Despite being on the second game of a back-to-back, it is still hard to bet against James and Davis. Yes, Irving looks like he is going to play, and the Nets are at home. However, the Nets have been on a downward spiral of late, and their home record (11-11) is rather mediocre.

When it is all said and done, I think the Lakers will not only win but also cover. If James and Davis play as well as they have for most of the season, they might not only cover the 5.5 points, but they may blow the Nets out in this one. For my money, I am taking the Lakers -5.5.