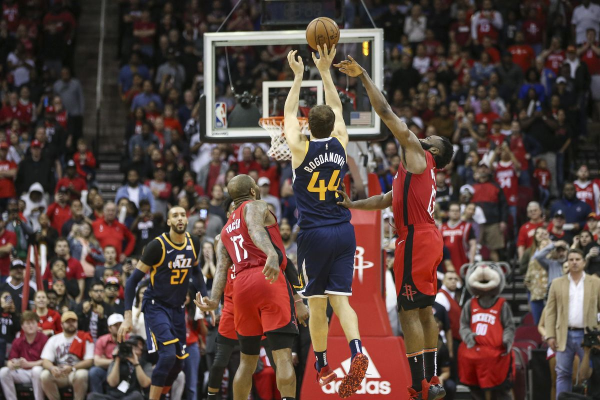 The Western Conference playoff picture shows a tightly-contested race between would-be contenders hoping to avoid the favorites in the opening round. After losing to the Utah Jazz on a last-second three from Bojan Bogdanovic on Sunday, the Houston Rockets could be in danger of facing one of the Los Angeles clubs in the first round.

The premier matchup of the NBA’s Sunday slate featured the Jazz and Rockets going head to head in Houston. Both squads entered the contest with 33 wins on the season, locking them in a battle for the fourth seed in the Western Conference.

After a strong first-quarter performance from Houston, the home team held a 33-25 lead. Utah spent the next three quarters clawing its way back to give itself a chance in the final moments of the game.

The 30 points of Jordan Clarkson and the 24 points, six assists, and five rebounds of Donovan Mitchell kept the Jazz in the contest, but it was Bogdanovic who served up the defining moment.

On a night in which Bogdanovic shot just 2-of-7 from the field and finished with eight total points, he was an unlikely hero.

After P.J. Tucker’s clutch three gave Houston a two-point lead with 1.6 seconds remaining, the Jazz called timeout and moved the ball up the floor. Utah called Bogdanovic’s number, who circled back to catch the inbounds pass at the top of the key, rose up over two Houston defenders, and sunk a three at the buzzer.

With a win on their home floor, the Rockets would have leaped over the Jazz and taken control of the fourth seed in the Western Conference. Bogdanovic didn’t let that happen, and Houston now slips even closer to the bottom playoff seeds.

In fact, James Harden and company hold only a one-game lead over the Thunder and Mavericks, who both own records of 32-21 and currently occupy the sixth and seventh seeds.

For Utah, which improved to 34-18, the victory pushes it to within 5.5 games of the conference-leading Lakers. More importantly, it keeps the Jazz in the top four of the Western Conference, a position that would come with a home playoff series against a team not from Los Angeles.

On the other hand, the 33-20 Rockets are in danger of slipping into a position that would pit them against either the Lakers or Clippers in the first round of the playoffs.

Sure, there’s still a long way to go before postseason play. However, Houston finds itself seven games back of the Lakers and is closer to the seventh seed than to the fourth seed.

Finishing anywhere between the sixth and eighth seed would come with the likelihood of playing one of the two Los Angeles clubs in the opening series of the postseason.

Houston has playoff experience, one of the best pure scorers in the NBA, and one of the highest-scoring offenses in the league. Despite all of that, it could be in a hopeless position to reach the NBA Finals.

In the Western Conference, the Rockets hold the third-best odds of any team to reach the title series. But at +600 and sitting in the fifth seed, Houston is a long way away from the Lakers and Clippers, both of whom sit on odds of +190.

Meanwhile, the +950 Jazz and +1200 Nuggets, who currently sit second in the conference, are proving themselves to be real threats to the Los Angeles clubs.

When it comes to winning the NBA Finals, the Rockets are currently part of a trio of teams alongside Boston and Philadelphia with odds of +1700. Despite the disparity, those are the nearest odds to those of the Bucks (+290), Lakers (+300), and Clippers (+300).