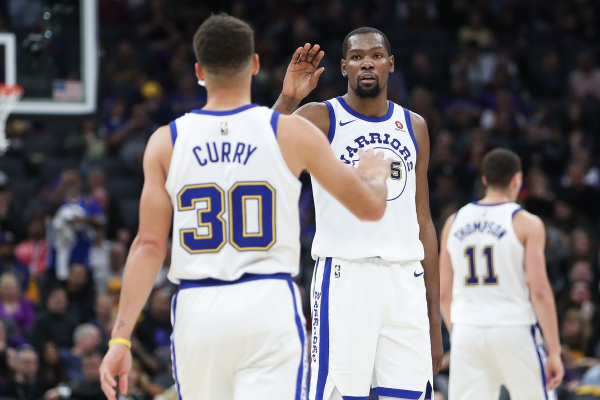 The NBA Finals have wrapped up as quickly as they began with the Golden State Warriors making short work of the ClevelandCavaliers in a four game sweep. It may have been closer of a series than the 4-0 series score indicates however, with the Warriors escaping Game 1 and Game 3 with narrow victories but a sweep is a sweep and wagering on the Warriors was always the good play. This Warriors dynasty in the making doesn’t seem to be slowing down much. Being able to get past the Rockets in seven games and then put down Lebron James and the Cavs in such a fashion proves yet again, this is a team of the ages already and anything from this day forward is just gravy.

While Game 1 was the best game of the series in terms of competitiveness, Game 2 was Steph Curry’s best game of the series. He hit nine three’s to set a finals record, passed out eight assists, and even grabbed seven rebounds as the Warriors rolled to a 122 – 103 win, covering and hitting the over for good measure. This was the team the Warriors wanted to be in Game 1. The Cavs were definitely feeling the hangover of letting Game 1 slip away from them and Curry made them pay at every turn.

Getting the series back to Cleveland was a big plus for the Cavs as they’d only lost one game there this whole post season. After two tough losses, the home crowd was the shot in the arm they needed and they responded early running out to a six point lead at halftime. But this was KevinDurant’s game and he put on a show to be remembered. With all the amazing things Lebron has done this postseason, KD’s Game 3 may have been better. 43 points on 15/23. 13 Rebounds. Seven assists. And a dagger three from about 36 feet out that will not be forgotten anytime soon. Again an easy cover as the Cavs limped down the stretch as Durant put on a show.

If energy level at tip off is any indicator of what the outcome of the game will be, we knew the result a few seconds into this one. A step sprier and two moves faster, the Warriors came out and set the tone early on grabbing a quick 10 point lead. It was pretty obvious what was coming. The Cavs did hang in there for a moment with a few runs of their own and even took the lead late in the second quarter but the Warriors were quick to respond and somehow opened up a nine point lead at halftime.

For all the attention there high-powered offense receives, the Warriors team defense is extraordinary and they can push big leads out quick because of that offense. Most teams can get three stops in a row and still only get 4 points. This guys make you pay. Three stops becomes 10 points somehow. And that’s just what happened in the second half as they ran out to a 25 point lead midway through the 4th and, again, covering easily.

What’s Next for the Warriors

This team is coming back and all the heavy hitters are returning. Curry, Durant, Thompson, Green, Iggy, et al. will go for three in a row and four out of five next year. As great as they are and as great as they will remain, you have to wonder if they can do it again though. The West will get even tougher next year and this team will be another year older, coming off another deep run through the playoffs. Injuries crept up on them this year and limited them significantly. Are they a good bet? Yes. But will they do it? Too early to think about because of how free agency may shake out but the early answer may also be yes.

What’s Next for Lebron

Lebron bolted the floor pretty quick after the clock hit zeros, which is just going to make everyone wonder more what is next for the greatest player on the planet. He was just amazing this postseason and to be swept out of the Finals must hurt. There is much speculation as to where he will land or if he will leave at all. His image took a huge hit when he took his talents to South Beach the first time so you have to wonder if his ego can handle it again. But this team is garbage and is nothing without him and that must make him crazy. Philly, the Rockets, maybe the Lakers are all places going to take a run at him. Early odds say he stays but judging by the way he walked off the court, Cleveland doesn’t appear to the place he wants to be for one minute longer.