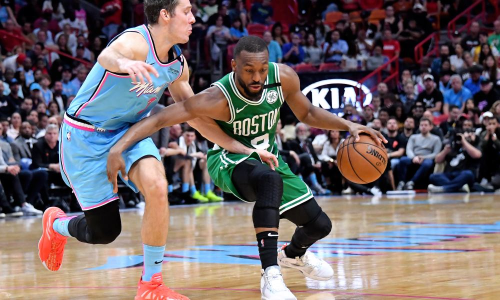 Game 4 of the Eastern Conference Finals between the Boston Celtics and Miami Heat will take place at 8:40 p.m. ET on Wednesday, September 23rd. The series currently sits at 2-1 with the Heat in the lead but the Celtics are coming off of a 117-106 Game 3 victory that was led by their young phenom Jayson Tatum. Both teams were given some extra days off in order to allow for the Western Conference Finals series between the Lakers and Nuggets to catch up to schedule. Throughout the entirety of Game 3, the Celtics never trailed one time, they clearly were not frightened about being down 2-0 and are on a mission. After Game 2, there was reportedly a confrontation between Celtics players in the locker room post game. The passion of this team is definitely not lacking.

Jayson Tatum led the way for the Celtics in Game 3, if he continues to play as he did finishing with 25 points, 14 rebounds, and 8 assists, the Celtics could very well tie up the series next game. He was dominant on offense throughout the entire game. This up and coming superstar is coming into his own this series and showing the entire league that he is indeed elite.

Tatum wasn’t the only one who contributed though, Jaylen Brown, Kemba Walker, and Marcus Smart each finished with 20+ points as well. It’ll be very hard for the Heat to pull off Game 4 if the Celtics have 4 players score 20+ points again, the Heat have to play better team defense. The Celtics outscored the Heat 60-36 in the paint as well, Boston has made it clear they want to impose their will in the paint going forward in this series. Boston had more assists and rebounds in Game 3 too, a pivotal shift from the prior 2 games, they showed they could in fact be the more physical team. The Celtics also got back one of their key rotational players last game in Gordon Hayward, this was a huge boost for the Celtics as he has been out with an injury since their first playoff series.

On the other hand, the Heat are familiar with what they need to do in order to win against the Celtics, they just need to go out and execute their game plan. The Heat’s head coach Erik Spoelstra is amongst the best of the best in the league so he will be sure to have his players prepared, especially coming off of this extended break between games. Amongst their top priorities next game will be to protect and attack the paint better. Although Heat big man Bam Adebayo finished last game with 27 points and 16 rebounds, as a team the Heat were simply outplayed in the paint when you look at the numbers. They also didn’t get the typical shooting nights they have throughout these playoffs from starters Goran Dragic and Jae Crowder, they each went 2/10 from the field, having poor shooting nights. As a team, they shot 38% while the Celtics shot 48%, this must change next game for the Heat to have a chance. The key to next game for them will be playing better defense and executing better on offense, if they fail to do so the Celtics will be looking to dominate Game 4 and tie the series up at 2 games a piece.

Look for the Celtics to come out with the same confidence they showed last game, they know they can win now and will be coming off of a huge confidence boost, this is why we are picking them to win Game 4.

Be sure to tune in for what looks to be a great game and check out the betting lines below;