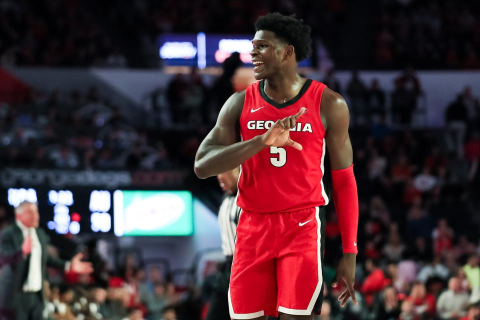 In a normal year, we would already be seeing the NBA‘s top rookies in action. But this year, it’s still not known where the stars of tomorrow will be playing. But the long wait ends today, as the 2020 NBA Draft will finally take place virtually at the ESPN headquarters in Bristol, Connecticut.

The Minnesota Timberwolves are on the clock unless they trade their pick and according to the latest NBA Draft betting odds, Georgia guard Anthony Edwards now has the best odds to be the first name called.

LaMelo Ball had been the favorite to be first off the board for the last couple of weeks, but the odds have flipped with most sportsbooks now offering Edwards, an explosive scorer who has been compared to Donovan Mitchell, as the chalk to be drafted first overall.

If Ball doesn’t go first overall, like he’s been expected to, the draft could be shaken up significantly.

What will the Warriors do With the Second Pick?

There is a lot of anticipation about who the Golden State Warriors will take at No. 2 to add to their core of stars, or if they will even keep their pick. The Warriors are expected to return to title contender status after injuries derailed them last season.

Wiseman, a multi-dimensional 7-footer, is projected to do big things on the next level. Adding him alongside Steph Curry, Klay Thompson, and Draymond Green could help ensure the Warriors return to the vaunted position they held before losing to the Toronto Raptors in the 2019 NBA Finals.

Where Else Could LaMelo Ball Land?

The Charlotte Hornets currently own the No. 3 pick, and while team owner Michael Jordan would no doubt love the opportunity to add Edwards or Wiseman to his team, if either one doesn’t go in the first two picks, it’s also not a certainty the Hornets keep the pick. If Ball doesn’t go to Minnesota or Golden State, it could be a prime spot for other teams to trade up to land him.

If Ball happens to fall outside of the top three, it would seem unlikely that he would fall past the Chicago Bulls, where he is +710 to land at No. 4. That being said, if Ball, Edwards, and Wiseman are the top three selections, the Bulls look likely to take Israeli small forward Deni Avdija. The Bulls’ most pressing need is at that position, and Avdija is the most popular name mentioned in that spot.

If there is a prospect outside of Ball, Edwards, and Wiseman that could end up in the top three, it might be USC big man Onyeka Okongwu. The Hornets have a big need in the post, and Okongwu, who is currently +500 to be drafted third overall, would fill it. Okongwu has room to improve on the offensive end but will immediately make an impact on the defense. He averaged 8.6 rebounds, 2.7 blocks, and 1.2 steals per game in his lone year at USC.

Along with odds on where top picks will be drafted, there are several other options for those who want to have a wager or two going while following Wednesday’s picks. That includes odds on how most of the remaining picks in the first round will play out and individual odds for where a number of top prospects will land.

There are also markets on how many first-round picks there will be from various conferences. With many talented prospects coming out of the SEC and Pac-12 as well as the potential for a lot of trades and need-based reaches, there could be a lot of value in taking either conference to have over 5.5 players taken in the first round.

Click here for a list of NBA betting sites where you can make a 2020 NBA Draft bet.