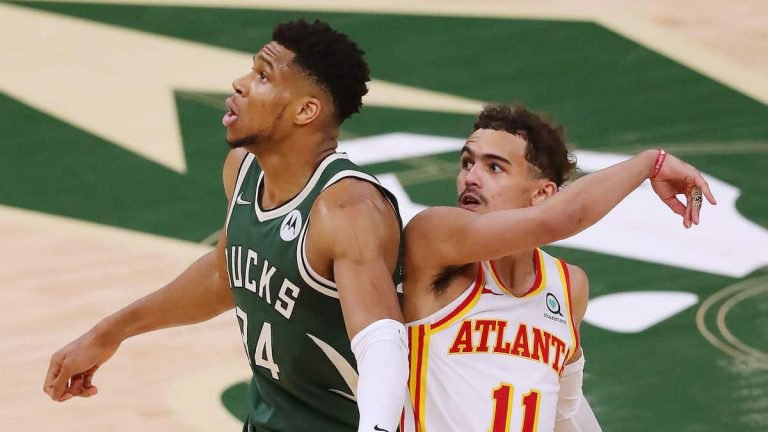 The Eastern Conference finals opened with an pretty entertaining Game 1 in Milwaukee, as the Hawks won on the road for the third series in a row. It took a Herculean effort from star guard Trae Young to pull off the upset, but here they are again in great position to make a favorite chase them. Milwaukee finally unlocked guard Jrue Holiday, but it just wasn’t enough to get the win on Wednesday night. The Bucks always seem to struggle with decision making, which is why I think the coach is still in danger if this does not turn out the way they want it to.

Atlanta is in Familiar Territory Looking to Avoid a Letdown

Per the intro the Hawks have amazingly won Game 1 of a series on the road yet again. They were down early but came back in the third quarter and were able to trade punches thereafter. The Hawks are now the fourth team to win Game 1 on the road 3 times in the playoffs, the first since the 1999 Knicks.

Trae Young poured in a game-high 48 points with 11 assists. He was brilliant, but I think I can also fairly criticize that he was a little too eager to take some very long shots that seemed ill-advised. They won the game, but he can be a little sharper with his reads and cut down on his game-high 6 turnovers.

Not to be overlooked is the job that forwards John Collins and Clint Capela did. Collins was second on the team with 23 points and 15 rebounds. Capela only scored 12 points but in grabbing 19 boards, he made sure the Hawks owned the glass on the road against the bigger Bucks.

The Game 1 win has not done a ton to the opening line for Game 2. The Hawks are +7.5 after being +8 in the opener. In each of the past two series they have lost Game 2 after upsetting in Game 1.

Milwaukee Can Be Better, But There is No Reason to Panic

The Bucks lost Game 1 at home. It was close and you can definitely see how they could have come away with a win. But it does send a message that they are not likely to dominate in the series.

It was definitely encouraging to see guard Jrue Holiday have his best game as a Buck with 33 points and 10 assists. I see no reason why he can’t keep that up against the Hawks, and even though Young went off a lot of that was after the Hawks forced a switch on defense.

Again, forward Khris Middleton was way off his game. This is frustrating especially because it he seems to show little ability to modify on nights where his shot isn’t dropping. Shooting 6 for 23 for the game, and 0 for 9 from three, is brutal. I don’t know how you can put the ball in his hands to win the game when he hasn’t made a three all game. Late game chaos is one thing, but that is where the coach has to step in a little more, right?

Reserve guard Bryn Forbes made a couple of shots and had some value off the bench. I would love to see him try and run Young a little more ragged by dragging him through more screens.

If you like the Bucks you are not getting much in the way of a spread change for Game 2. Milwaukee has been great at home this season with a 31-11 record. They did lose back to back games at Fiserv Forum three times during the season though.