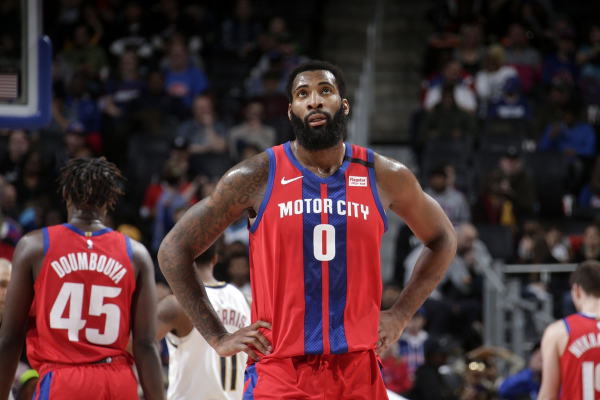 The Cleveland Cavaliers haven’t been great at anything this year. But with the trade-deadline acquisition of Andre Drummond, Cleveland now has the league’s top rebounder on its roster.

Drummond, who has an opt-out clause in his contract for next year, was being shopped around by the Detroit Pistons, who believed the center would be leaving after this season. In exchange for Brandon Knight, John Henson, and a 2023 second-round draft pick, Detroit shipped Drummond to Cleveland.

The Cavaliers will now be tasked with finding a way to fit the two-time All-Star into the lineup.

The 26-year-old has been a dominant rebounder for much of his career. In addition to averaging a career-best 17.8 points and 15.8 rebounds per game this season, Drummond was the NBA’s leading rebounder in three of the previous four seasons.

Drummond will now take those talents to Cleveland, but not without directing some harsh words toward Detroit.

“If there’s one thing I learned about the NBA, there’s no friends or loyalty,” Drummond said via Twitter after the news broke. “I’ve given my heart and soul to the Pistons, and to have this happen with no heads up makes me realize even more that this is just a business! I love you Detroit.”

Drummond was selected ninth overall by Detroit in the 2012 draft and will now enter the next chapter of his career with the Cavaliers.

What Cavs Can Expect From Drummond

As the league’s premier rebounder, Drummond will always be sought after by NBA teams. As such, Drummond is expected to forego his $28.75 million option next season in favor of testing a weak free agency market.

Unlike this past offseason, when players like Kawhi Leonard and Kyrie Irving were on the move, the upcoming free agency period features the likes of Gordon Hayward and DeMar DeRozan. So, Drummond would like his chances of landing a strong long-term deal.

As for the rest of this season, Drummond will be a centerpiece of the Cavaliers, working in tandem with the likes of Collin Sexton and Darius Garland in the backcourt. On paper, this could be a formula that works for Cleveland.

Sexton currently leads the team in scoring with 19.9 points per game. If Drummond can continue his prowess on the boards while providing another scoring option for the Cavs, this team could be taking a large step toward relevancy.

However, Cleveland would also need to find a way to convince Drummond to stay beyond the second half of this season if they’ll be able to build a contending roster around Drummond and Sexton.

If Drummond leaves, the Cavs can be satisfied that they didn’t overpay to get Drummond on what would basically be a half-year rental.

Cavaliers A Long Way From Contention

It feels like it’s been decades since the Cavaliers rallied back from a 3-1 deficit to take down the Warriors in the NBA Finals. Since then, Cleveland has struggled to remain competitive without the likes of LeBron James and Irving.

With a record of 13-39, the Cavaliers are currently the worst team in the Eastern Conference and can only boast a better record than the 12-40 Warriors throughout the entire league.

In addition to only having six home victories so far this season, Cleveland is tied with Atlanta for the worst point differential average at 8.8 points per game.

All of the above paints the picture of a weak basketball team that’s a long way from competing atop the Eastern Conference.

As far as winning the conference is concerned, the Cavaliers are among those with the worst odds at +25000. That puts Cleveland in a different world than the Milwaukee Bucks, who are favored to win the Eastern Conference at -130.

The same holds true when it comes to winning the NBA Finals, where the Cavaliers are tied for dead last, according to the odds.

Drummond might be the first step back to glory for Cleveland, but it will likely take many more to deliver this team to another Finals run.