Bucks Lose Third In A Row; Time To Worry? 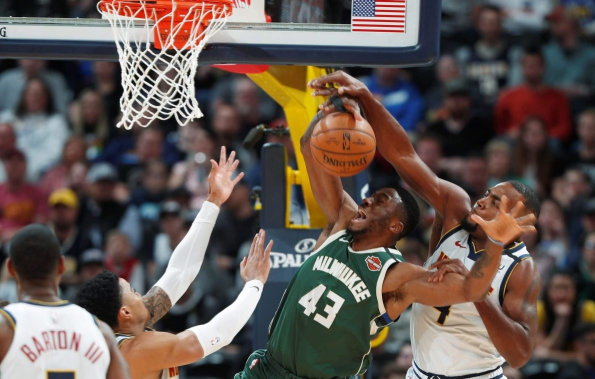 It’s not often that the Milwaukee Bucks fail to score at least 100 points. In fact, Milwaukee took the victory in a 93-85 contest against Charlotte the last time it occurred. This time, however, it led to the Bucks’ third loss in a row.

Milwaukee went into Denver to take on the Nuggets Monday night with just about everything going against them. In addition to playing on the road for the third consecutive game, the Bucks were playing for the second consecutive day and were without reigning MVP Giannis Antetokounmpo.

In fact, Milwaukee was playing without all six of its top scorers.

Denver took advantage, jumping out to a 15-point lead in the first quarter of play on the back of a 39-point performance. Like the Bucks, the Nuggets have yet to lose double-digit games at home (25-8), and they weren’t planning on dropping one to the short-handed Bucks.

However, not everything was going Denver’s way. It was an off night for Nikola Jokic, who went 4-of-13 from the field and finished with only 10 points.

Luckily for Jokic, he had plenty of support.

Jamal Murray finished the contest with a team-high 21 points, Jerami Grant added another 19 from the bench, and Paul Millsap racked up a 20-point, 10-rebound double-double.

Without the likes of Antetokounmpo, Khris Middleton, and other key players, it’s not a shock to see Milwaukee fall in Denver. However, it’s still surprising to see the Bucks lose their third contest in a row.

In fact, it wasn’t until Sunday’s defeat at the hands of the Phoenix Suns that Milwaukee lost back-to-back games for the first time this season.

While the Bucks won’t be hitting the panic button any time soon, it’s at least slightly concerning to see the Eastern Conference leaders fall in each of their last four road games.

After losing to Miami on the second leg of a back-to-back, Milwaukee took care of the Pacers at home. Then, the Bucks embarked on their three-game road trip, which started with a 10-point loss to the Lakers.

With Antetokounmpo nursing a minor sprain, Milwaukee lost each of the next two games to drop their away record to 25-9.

Is it time to worry?

With his team sitting on a sizeable lead in the Eastern Conference, Bucks coach Mike Budenholzer felt that he could take a night to rest his guys, especially on the latter end of a back-to-back at the end of a three-game road trip.

For now, the Bucks will be perfectly comfortable exchanging good rest for a loss. Yet Budenholzer may not feel the same way with games against Boston and Miami right around the corner, and a vital back-to-back stretch against Toronto waiting at the start of April.

All season long, it’s felt like the NBA Finals will pit Milwaukee against one of the two Los Angeles clubs. Milwaukee’s path to the Eastern Conference crown has rarely been in danger.

Even after suffering their first three-game losing streak of the season, the Bucks are big-time favorites. With odds of -185 to win the conference, Milwaukee doesn’t have a rival in sight.

And despite losing to the Lakers in Friday’s big contest, the Bucks remain favorites to win the NBA Finals with odds of +240.

Meanwhile, the +270 Lakers have opened up a small lead over the +340 Clippers after taking down Philadelphia, Milwaukee, and the Clippers in three straight contests.

For now, there’s no reason for the Bucks to panic until they begin to drop consecutive games with Antetokounmpo on the floor.