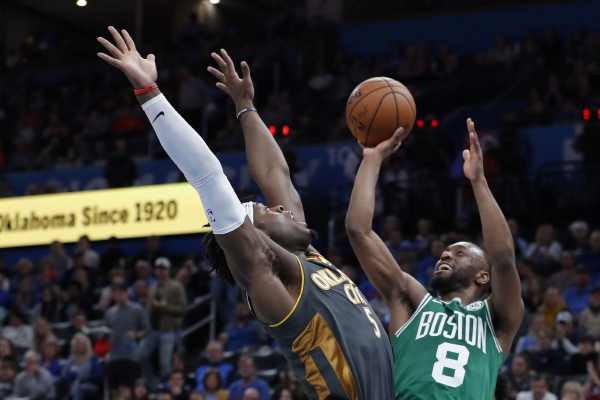 Tuesday night features a matchup of East versus West as the Boston Celtics (37-15) travel to the Toyota Center to take on the Houston Rockets (33-20). For both of these teams, playoffs are on the horizon as we approach the latter part of the season; however, both are still aiming to try to improve their playoff positioning.

The Celtics currently sit in third in the Eastern Conference, two games behind the Toronto Raptors, while the Rockets sit in fifth in the West, two games behind the Utah Jazz. With both teams aiming to improve their standings, both will be looking for a signature win over an opposing conference contender. Tipoff for this one is scheduled for 9:30 pm ET.

Boston comes into this one on a seven-game winning streak, including a one-point victory over the Oklahoma City Thunder on Sunday. In the win, Kemba Walker and Jayson Tatum combined for 53 points, with Tatum notching a double-double with 26 points and 11 rebounds.

Houston enters this game having suffered a tough one-point loss against the Jazz on Sunday. After previously having won four in a row, the Rockets have now lost two in a row. They will be looking to bounce back against a tough Celtics teams at home.

The Rockets come into this one as 2.5-point favorites playing at home. The over/under on total points scored is set at 231.

The Celtics have been getting elite production from a trio of starters this season, as Jayson Tatum, Kemba Walker and Jaylen Brown have all been averaging over 20 points per game. Tatum is averaging 22.2 points, 6.9 rebounds and 1.3 steals, while Walker is averaging 22 points, four rebounds, five assists, with both earning All-Star nods.

Brown is averaging 20.2 points, 6.5 rebounds, and 2.2 assists, and he is expected to play on Tuesday after dealing with an ankle injury.

Trying To Turn It Around

Houston knows that it can’t afford long losing streaks in a tough Western Conference and will be looking to get back on track against the Celtics at home. To do so, the Rockets will look to their two-headed monster of James Harden and Russell Westbrook to lead the way.

After a trade sent out big man Clint Capela to the Hawks, the Rockets are trying to get new forward Robert Covington acclimated to the team. On the season, Covington is averaging 12.3 points, six rebounds, 1.3 assists, one steal and one block per game.

Taking Celtics And The Points

This should be an exciting matchup, as it features one of the best defenses in the NBA versus one of the best offenses. Still, I have to go with the hot hand in this one. The Celtics have been absolutely rolling lately, while the Rockets have been in a skid since the trade deadline.

I don’t anticipate that the skid will last too long, but the Celtics are a tough team to try to break it against, even if the game is at home, where the Rockets are 18-8. For my money, I feel more comfortable taking the Celtics, given that they are being spotted 2.5 points in this one.