Spurs vs Grizzlies Preview: Spurs Should See Season of Struggle End in Memphis Against Morant, Grizzlies 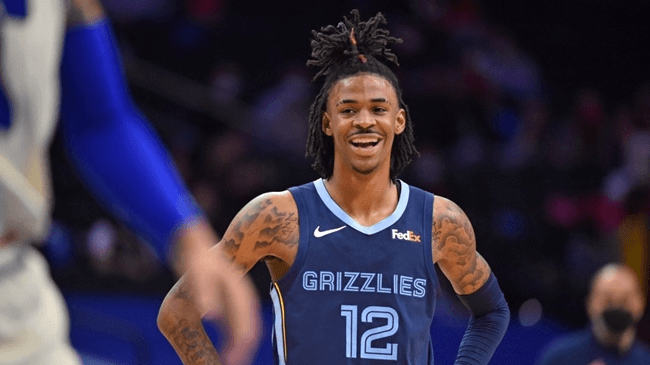 Will tonight’s Spurs vs Grizzlies matchup be more competitive than either of yesterday’s NBA play-in games, or will the trend of routs continue in Memphis?

Last night, the Indiana Pacers put up 144 points against the Charlotte Hornets in a 27-point rout. Then in the nightcap between the Washington Wizards and Boston Celtics, Jayson Tatum and the Celtics blew away the Wizards in the second half in a 118-100 win.

Will there be a tighter 48 minutes between these Southwest Division rivals? Given that none of their regular-season matchups were within single digits, the odds are not exactly favorable. Here’s a look at the matchup and what outcomes in Memphis will be worth throwing your money behind.

Spurs vs Grizzlies odds are via FanDuel Sportsbook as of Wednesday, May 19 at 12:55 pm ET. For more NBA betting odds, check out our NBA odds page. It features updated odds from FanDuel and other top online sportsbooks.

Last season, the Spurs missed the playoffs for the first time since the 1996-97 season, which was Gregg Popovich’s first season as Spurs coach. Expectations were not high for this season either. Rebuilding mode was in full force, and the Western Conference was set to be better as a whole.

Fortunately, they backed into a play-in berth with a couple of games remaining, despite the Sacramento Kings’ late charge. So, there is an opportunity here to put a struggle of a season behind them and return to the postseason proper. That said, few would expect them to beat either the Lakers or Warriors even if they win tonight in Memphis.

If there is a positive, the Spurs were a better team on the road than at home in the regular season. On the road, they were 19-17, while they were 14-22 at home. However, that road record was made a lot less sparkling by losses in seven of their last eight road games.

The Spurs have no significant injury concerns heading into tonight’s game other than than point guard Derrick White, who is likely done for the season due to a right ankle sprain suffered in late April. White, limited to only 36 games this season due to injuries, is a big loss though, as he was their third-leading scorer behind DeMar Derozan (21.6 points per game) and Dejounte Murray (15.7 points per game).

There aren’t any major discrepancies across the board in the Spurs’ home and away splits, positively or negatively. But there is potential if things click, which is a big if. One of those two wins they had in their last dozen games came last week against the Milwaukee Bucks, at home no less. They torched Giannis and a full-strength Bucks team, scoring 87 first-half points on the way to a 146-125 win.

After just missing out on the playoffs last season, disappointment could await the Grizzlies again this season. The loser of tonight’s Warriors vs Lakers matchup will be expected to join the winner in the first round. The Grizzlies are a combined 1-5 against the Lakers and Warriors, and they are in this game because they fell by 12 at Golden State on Sunday with the #8 seed up for grabs.

But the Grizzlies are on the cusp of the first round for a reason, and they have racked up a number of impressive wins on the way to their first winning season since the 2016-17 season.

Ja Morant is without a doubt the headliner on this team, but a huge second-year leap is not behind this successful season. In fact, his shooting percentages are down, his assists per game has only marginally increased, and his scoring average only went up from 17.8 points per game to 19.1 points per game.

But a star should make the other players around him better, and that is exactly what has happened with the Grizzlies. Backcourt mate Dillon Brooks continued his rise after a breakout campaign last season, averaging a career-high 17.2 points per game. Jonas Valanciunas has had a career-best season, and so have Kyle Anderson, Grayson Allen, and De’Anthony Melton. Anderson averaged double figures in scoring for the first time in his career, as did Allen. Also, rookies Desmond Bane and Xavier Tillman have provided valuable contributions.

Had Jaren Jackson, Jr. been available all season, the Grizzlies would have made a push for a top-six seed. But Jackson, who suffered a torn meniscus in the bubble, returned in late April and played in 11 games. He’s not where he would have been were he healthy all season, but his return was timely.

Will this matchup be more of a contest than last night’s play-in games? Considering that the three regular-season meetings were decided by 12, 17, and 31 points, don’t get your hopes up.

But there is a good chance that the home team wins for the first time this season after the road team took the first three meetings. The Spurs won in Memphis to open the season, while the Grizzlies scored two wins in San Antonio to end January and begin February.

The Grizzlies were not good at home for much of the season. In their first 22 home games, they were 9-13. But they matched that win total in their last 14 home games to finish at .500 at home, and they enter the play-in with four straight wins at FedExForum.

With that home form in mind and where the Grizzlies are relative to where the Spurs are, it’s difficult to picture anything other than a Grizzlies win. Will they cover? Our log of NBA picks for this one give the Spurs the spread edge. They could certainly keep it close if DeRozan goes off. But if there is a spread side to back here, it’s the home side.