Suns vs Lakers Game 5 Preview: With AD Unavailable, Will Playoff LeBron Need to Surface to Save the Lakers in Phoenix? 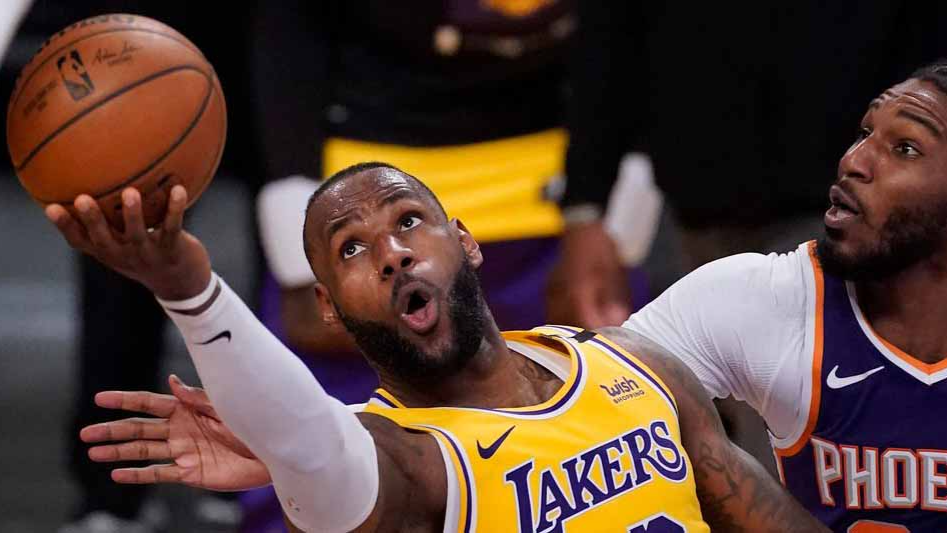 Which turn will the Lakers vs Suns series take tonight in Phoenix? Injuries have been key in the series thus far, and the latest one could potentially shift the series and the NBA postseason landscape as well.

The Lakers held a 2-1 lead after taking Games 2 and 3, and they were poised to take control of the series at home in Sunday’s Game 4. But they lost Anthony Davis to injury after the first half, which sucked the life and the hope out of the Lakers. The Suns took over in the second half at Staples Center to knot the series, and they are now favored to win the series.

Now the series returns to Phoenix for a massive Game 5 tonight. The Suns have a chance to put the champs on the brink, and it’s gut check time for the Lakers. Will the Suns hold serve at home? Or will LeBron James pull out vintage playoff LeBron to lead the Lakers to a vital win?

Lakers vs Suns odds are via FanDuel Sportsbook as of Tuesday, June 1 at 9 pm ET. For more NBA betting odds, check out our NBA odds page. It features updated odds from FanDuel and other top online sportsbooks.

Betting News uses an aggregation of picks from reputable industry sources for all NBA, MLB, and NHL games that are previewed on the site. For detailed Lakers vs Suns betting information, including a source-by-source betting picks breakdown, check out the Lakers vs Suns matchup page.

Will AD’s Status Make or Break the Lakers’ Game 5 Hopes?

Heading into Game 4, Davis was dealing with a knee sprain. But it ended up being a completely different injury that took him out of Game 4. In the second quarter, he suffered a groin strain, and after playing out the remainder of the first half, he was unable to take the court in the second half.

The Lakers made a late push to try to make things interesting, but the Suns rebuffed the rally to take the win. LeBron led the way with 25 points, 12 rebounds, and six assists, but no one else scored more than 12 points. It was a return to what we saw frequently in February and March after AD was sidelined, and it could not have happened at a worse time for the Lakers.

Ahead of the game, AD has been ruled out, which is unsurprising based on prior speculation. Markieff Morris will slot into the starting lineup in his place.

Supporting Cast Needs to Step Up After Game 4 Failures

With AD out, the supporting cast will need to step up for the Lakers far more than in Game 4. The Suns deserve a lot of credit for their defensive performance, as they allowed only 42 points in the second half. But it was not encouraging for the Lakers to lay such an egg at home and to wilt after such a bright start, even with AD’s injury in mind.

Could this be an opportunity to move Montrezl Harrell back into the rotation? Harrell did not play in Games 2 and 3 after scoring 12 points in 15 minutes in the Lakers’ Game 1 loss. He returned to action in Game 4, but he played only five minutes. He hasn’t had the expected impact in his first season with the Lakers, but he could certainly render that meaningless if he gets and makes the most of some valuable minutes.

Talen Horton-Tucker has also not received many minutes in the series, but he could warrant a serious look tonight as well. There’s value in trying anything at this point, especially if those in prominent roles fail to contribute significantly again.

But more than anything, is this when playoff LeBron makes his presence felt? LeBron hasn’t had to really tap into his postseason prowess thus far, but if there is a time to do it, it is tonight.

The Lakers are the consensus spread play tonight, but how much confidence can there be after what we saw in Game 4 and throughout the season when they were shorthanded? Those results don’t inspire a lot of confidence at all. But if there is something to grasp at for Lakers backers, it is that they have the game’s biggest star on their roster. And while he has been there, done that, and gotten the T-shirt several times over, the Suns are in a very unfamiliar spot. It’s a favorable spot, but it is an unfamiliar one.

With so many variables at play, this is the kind of game where in-game action is the way to go. Even then, caution should be exercised.