76ers Looking To Finish Strong Despite Loss Of Simmons 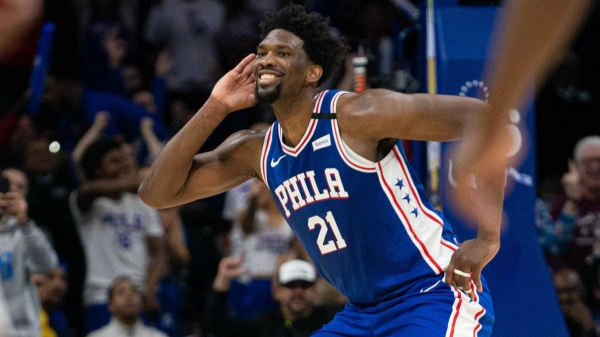 There’s a lot of uncertainty in Philadelphia these days.

It’s uncertain how much time All-Star guard Ben Simmons will miss after suffering a back injury. It’s uncertain where the 76ers will end up in the playoff race. And it’s uncertain just how good Philadelphia can be without Simmons.

On Monday night, Joel Embiid reminded us that he can be nearly unstoppable when he’s playing loose, giving Philly fans hope that he’ll be able to carry this team in Simmons’ absence.

“I said before the All-Star break I was going to have a different mindset, be aggressive,” Embiid said. “I said I was going to get back to having fun.”

Against the Hawks, Embiid drained a career-high 49 points, capped off by a three-pointer. He also added 14 rebounds and sunk 14 of his 15 free-throw attempts.

Along with production from teammates, Embiid’s 49 points and Tobias Harris’ 25 points were enough to earn the 76ers a 129-112 victory over the Hawks. The win improved Philly’s home record to 27-2.

So, we know that Philly can beat the Hawks at home, but can they really make a run at a high playoff seed if Simmons is going to be out for an extended period of time?

We may very well find out just how good this 76ers squad is without Simmons on the floor as Philadelphia will take on the Clippers and Lakers in Los Angeles to kick off the month of March.

Simmons Injury Leaving Everyone In the Dark

After Simmons left Saturday’s game against the Bucks with back soreness, the 76ers were hoping their star guard did nothing more than tweak a muscle. Those hopes are now rapidly dissipating, and Philadelphia is preparing for life without Simmons for the foreseeable future.

The team is now saying a course of action to treat Simmons’ back injury could be decided as early as Tuesday, which means we could soon know what sort of timetable the 76ers are working with.

While Philadelphia can ill-afford to be without Simmons as they get set for a West Coast road trip, there’s not much coach Brett Brown can do without more information on when to expect Simmons back in the lineup.

When asked about how long Simmons will be out, Brown said, “It really is kind of, like, how long is a piece of string? Who knows? Who knows?”

That’s not exactly an encouraging message for 76ers fans to hear.

This season, Simmons is averaging 16.7 points, 8.2 assists, and 7.8 rebounds. While Embiid and Harris both average more points than Simmons, many believe Simmons is the key to a deep playoff run.

The 76ers are facing a plethora of issues right now.

First of all, Philly is without Simmons for an undetermined amount of time. Second, they’ve been unable to hang on to a top-four position in the Eastern Conference. Third, the 76ers are just 9-20 on the road.

All of the above is coming together as a recipe for failure.

You see, because of Philly’s ineptitude on the road, they need to claim a high playoff seed to ensure home-court advantage for as long as possible throughout the playoffs. Yet claiming a top seed becomes more difficult without any contribution from an injured Simmons.

Philly is currently 36-22 and fifth in the conference standings, placing them behind the Bucks, Raptors, Celtics, and Heat.

If Simmons remains out for several weeks and Philly fails to make up ground in the standings, a 76ers team that began the season with championship aspirations will be a far cry from a favorite to win the conference.

Philadelphia currently owns the fifth-best odds to win the Eastern Conference at +800. While Milwaukee is way out ahead of everyone else with odds of -165, Philly trails closely behind the Celtics (+750), Raptors (+750), and Heat (+750).