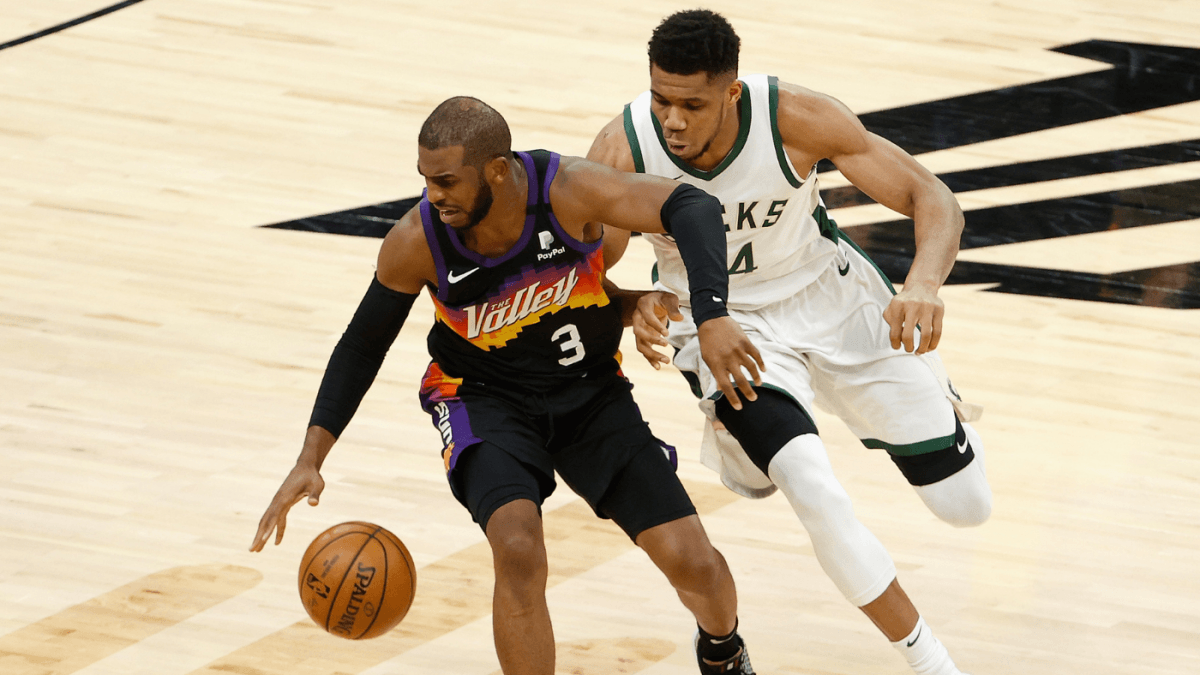 I know the TV ratings talking heads are going to complain but if we get good competitive basketball that is all that will matter to people like us. As a fan I just hope we see a healthy Bucks team, for as much of the series as possible. When these teams met during the season they played two games decided by a point. Phoenix won both but these teams proved to be a pretty even match.

After Impressive Run, Bucks Sweat on Health of Their MVP

Milwaukee won the Eastern Conference by way of series wins over Miami, Brooklyn, and Atlanta with that victory over the Nets in Game 7 being considered the true Eastern Conference Finals. Now Milwaukee is where they are supposed to be for the first time since Giannis emerged and sadly his health is in doubt.

In closing out Atlanta without their top player we have seen Milwaukee be more resourceful than expected. Forward Khris Middleton has really stepped forward as the team’s closer, and guard Jrue Holiday looks to be the player they thought they acquired after a quiet regular season. With forwards Bobby Portis and PJ Tucker, this team has more than enough grit and toughness to win it all. In the past they have been much softer and they know it hurt them. Now they have the ultimate test.

Injury and Illness Mark Phoenix’s Path to the NBA Finals

Phoenix’s path to the Finals involved knocking out LeBron’s Lakers, the MVP-led Denver Nuggets, and then the Clippers without Kawhi Leonard. You can make an argument that they got lucky with injuries to the likes of Anthony Davis, Jamal Murray, and Leonard making it easier to win those series. But that is life in pro sports. Building great teams means having them be healthy when it matters most. I never like penalizing winners for who they beat, or didn’t. It is not like they injured their opponents Tonya Harding style.

Phoenix has dealt with its own injury and illness issues too. Chris Paul got hurt in that opening-round series against L.A., then he missed time again due to COVID at the start of the Western Conference finals. In both cases Phoenix persevered. That counts for something.

The Suns finished second in the Western Conference in the regular season, and they have beaten three teams who had lower future odds than they did coming into the season. If they beat the Bucks, that would be a fourth.

If the results we saw from these teams are a predictor of the kind of series we are going to get then bring it on. I have no trouble with the Finals being for diehards and degenerates only.

NBA Finals odds are via FanDuel Sportsbook as of Monday, July 5 at 3:07 pm ET.

Odds to Win the NBA Finals

The health of Giannis hangs over the NBA Finals. In looking at Game 1 it looks like the oddsmakers are not expecting the two-time NBA MVP to play, but no definitive word has been given on his status yet.

With the numbers, the way they are, a healthy Giannis might have made this series about even in terms of pricing. Phoenix might have gotten the nod for having a homecourt advantage, but I think the ratings would have been very close, especially with the bump the Bucks would get for how well they played without him.

If you like the Bucks whether Giannis plays or not then I would stack the series correct score odds. Maybe he suits up and stars, or maybe they find a way to win with him not at full strength. Either way there are lots of profitable ways to work with those numbers This Phoenix team is better than the Atlanta team they just beat, but sometimes matchups just work. Jrue Holiday can limit the effectiveness of Chris Paul, and if that happens then the Suns are in big trouble.

I am not a big fan of the Suns’ pricing even though I like their chances of winning quite a bit. If you like them I would be more likely to go game to game and maybe back a future on Paul or Devin Booker for MVP. The only NBA Finals MVP to come from the losing team was Jerry West, who was the first NBA Finals MVP back in 1969.

Will Giannis Be Able to Play?

His status is going to dominate the series narrative as well as what happens on the court if he is healthy enough to get out there. It is really hard to know what he is and is not capable of right now and how much the Bucks are willing to risk to get him out there. My gut is saying they rest him for at least one more game. If they win, maybe they wait until Game 3 in Milwaukee before he plays.

One way or the other, he is going to impact the series. It is just hard to know how just yet.

Will Middleton Continue His Star Turn?

The more I watch Khris Middleton, the more he reminds me of Paul Pierce, a guy who is more savvy than athletic on the basketball court. He can do everything pretty well, and Middleton is proving to be quite the clutch performer this season too.

With Giannis out it has been interesting to watch Middleton pick his spots. Against Atlanta, he had a couple of the biggest quarters we have seen in the playoffs. They are going to need more of that, especially if Giannis is still compromised. They were also learning against Brooklyn and need him just as much when Giannis is healthy too. It has taken a few seasons, but maybe now they know how to get the most of out of the personnel.

Giannis or no Giannis, the Bucks have to find the right pace and style for this series. When these teams played during the regular season they played two high-scoring games, with the Suns winning by a point each time. With Giannis out of the lineup, the Bucks do not run as much. But even with him in the playoffs, they were having a lot of success by slowing things down so he and Middleton were using a lot more possessions. The sooner they find what is working best the more competitive they will be.

Can Chris Paul Handle the Pressure of Being in His First NBA Finals?

Chris Paul has been fantastic in these playoffs and is making his first NBA Finals appearance, finally. That does not mean the pressure is off though, and the Suns are going to be relying on him as much as ever.

I don’t want to make this series about his legacy, but I think he is acutely aware that just getting this far is not going to be enough. When people talk about winners they mean championships. How does he handle that pressure?

Guarding Assignments Will Be Key

It was pointed out to me one time that the Suns are built kind of like a classic 80s/90s team. Milwaukee is a little different, so I am curious as to who guards who? Do the Suns want DeAndre Ayton hanging out on the perimeter against Brook Lopez? Do they want Paul on Holiday or do they want to have him hanging out in the corner against Tucker? If Giannis is healthy who gets that assignment, Crowder?

This is a series where it is not obvious how these teams are going to guard each other, and it will be interesting to see how the Suns, the better defensive team deploy their troops. Can Mikal Bridges shut down Middleton?

The Suns have won the first game of all their playoff series and the first two in their wins over Denver and the Clippers. This series looks like it could be tight and homecourt might be a deciding factor.

Also, if Giannis is not playing in Games 1 or Game 2 and the Suns lose, it will be doubly detrimental to their chances. Milwaukee lost the first game against Atlanta and the first two against Brooklyn so they know how to come back. Phoenix does not want to learn if they are able to do so as well in the Finals.