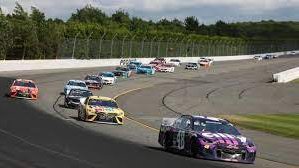 The 21st race of the NASCAR Cup Series season will be in the Pocono Mountains for the annual running of the M&M’s Fan Appreciation 400 at Pocono.

Alex Bowman and Kyle Busch split the Pocono double-header last season. This year, there is only one race over the weekend at the unique three corner track. The fight for the final two playoff spots is heating up, so expect a hard-fought battle from all of the bubble drivers as the weeks wind down.

With the series lead in wins, Chase Elliott is once again at the top of the odds list with the shortest odds for Sunday. His Hendrick teammate, Kyle Larson, is right behind trying to hunt him down.

Elliott is the safe pick this week if you are looking for return over value. He is the heavy favorite to pick up his 4th win of the year, and the rest of the field will have to find a way to take him.

Elliott leads the series in Top 10s with 14, and he is putting together quite the streak. In 4 straight races, he has finished in 2nd or better. Two of those were victories in Nashville and Atlanta. He has alternated 1st and 2nd place finishes, so considering he finished in 2nd last week, the streak shows promise for him to come away with the win.

As mentioned, Elliott is not going to bring massive value this week, as he has a history of running well this season. However, if you are in the mindset that a return is better than no return at all, Elliott is the perfect candidate for you.

It’s hard to believe that Ryan Blaney still has not found victory lane this year. With 7 Top 5 finishes, he has been one of the best at running up front and staying up there through trouble.

Even with his solid season, he is still on the bubble to make the playoffs. If a couple for 1st time winners happen this season, Blaney may find himself on the outside looking in. He will have urgency and dedication when the green flag flies in the mountains.

With 3 Top 5s in the last 6 races, Blaney is due for another solid run at Pocono. +800 isn’t a bad play for a driver who needs to win to firmly secure a spot in the postseason.

Bowman is the play for someone who likes to take risks. He ran extremely well at this track last season and even picked up a victory with a last lap pass after Kyle Larson blew a tire.

Bowman gets a lot of good results by putting himself in safe positions to strike. He waits until the moment is right, and then he attacks. The issue is that he sometimes waits too long and comes up short.

It’s a risky bet, but he is the long shot for the week, and if it hits, you’ll be very happy you went with Alex Bowman to take the checkered flag.

NASCAR at Pocono Prediction and Pick

elliott is too consistent right now to bet against. He is running at his best midway through the year, and he has a streak of 4 straight Top 2s. He will aim for his 3rd win in 5 races on Sunday as the rest of the field will be a dot in his rear view mirror.