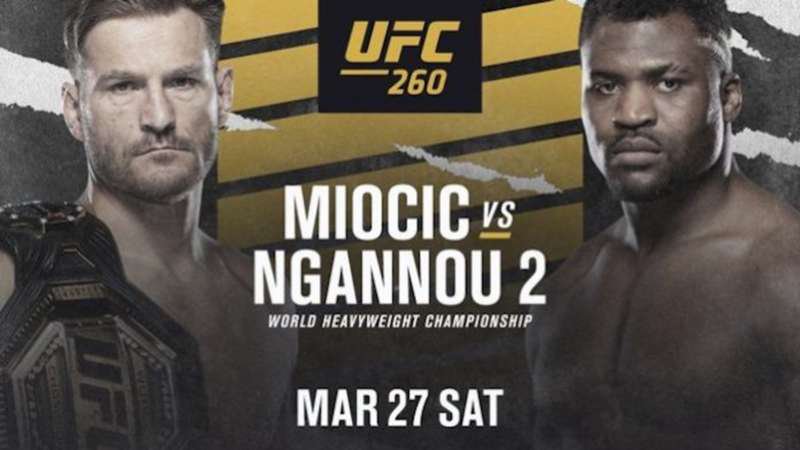 The UFC heavyweight title is on the line this weekend in the main event of UFC 260. Stipe Miocic will try to defend his heavyweight strap against Francis Ngannou for the second time as the bout will be a rematch of their 2018 fight in which Miocic won by unanimous decision.

While a featherweight bout between Alexander Volkanovski and Brian Ortega was originally on tap for the co-main event, the fight was cancelled due to a positive COVID-19 test from Volkanovski. A Welterweight matchup between Tyron Woodley and Vicente Luque will serve as the co-main event instead.

All odds listed are per FanDuel Sportsbook

Despite being the most decorated heavyweight in UFC history and defeating Ngannou with ease back in 2018, Stipe Miocic enters Saturday’s main event as a slight underdog to the Cameroonian fighter.

Miocic has fought three times since facing Ngannou but all three of those bouts were against the same opponent: Daniel Cormier. Miocic lost the first bout but won the rematch as well as the rubber match which took place in August of last year.

Ngannou, on the other hand, has fought five times since last facing Miocic. He lost his second fight in a row in a snooze fest to Derrick Lewis but has since won four-straight fights with all four of victories coming in under 1:11 of the first round. Ngannou was the -190 favorite over Miocic in their first fight.

It’s generally a good UFC betting strategy to bet on the fighter who won the first fight when they square-off in a rematch. This is especially true when they’re set as the betting underdog in the second fight.

For most UFC fans, it has to be a bit of a head-scratcher to see Ngannou as the favorite this time around. Miocic out struck him 70-21 and showed the world Ngannou’s shortcomings as Miocic landed six takedowns and kept him on the mat for the majority of the fight.

Since the first fight, Ngannou hasn’t shown us anything that we didn’t already know. He has the most knockout power of anyone on the UFC roster but we saw Miocic eat the shots when he had to before using his wrestling to make nullify Ngannou’s power. Miocic as an underdog in the rematch is a gift that you can’t pass up.

The former UFC Welterweight Champion will try to end a three-fight losing skid as he’s yet to have his hand raised since losing his title to Kamaru Usman back in March of 2019. He’s set as a +205 underdog to rising star Vicente Luque who has won twelve of his fifteen fights within the promotion including his most recent two.

This will be the second-longest odds Woodley has been set at in his UFC career with his most recent fight being the longest when he lost as a +260 underdog to Colby Covington. Luque has been the betting favorite in every single one of his UFC fights outside of his bout against Stephen Thompson in which he lost via unanimous decision. Luque is 12-2 in the UFC as a favorite.

Of his nineteen wins as a professional, Vicente Luque has won via KO/TKO in eleven of them for a knockout rate of 57.89%. He’s been especially sharp as a striker as of late as six of his last seven victories have come via ref stoppage due to strikes. Furthermore, he’s going up against an opponent in Tyron Woodley who was defeated in his last fight via TKO and has looked completely lost in the octagon as of late.

Woodley’s path to victory will come from his wrestling but he’s 1-4 with his takedown attempts through his 3-fight lost streak and he’s looked gun-shy to shoot for a double in those bouts. Luque enters the fight with a solid 64% takedown defense so expect this fight to stay on the feet, which is exactly where Luque shines.

One of the top prospects in the UFC, Sean O’Malley, will try to rebound from his first career loss when he takes on Thomas Almeida on the main card of UFC 250. Almeida may be fighting for his job as the Brazilian has lost four of his last five fights including three-straight.

O’Malley has been set as the betting favorite every single time that he’s stepped inside the UFC octagon but he lost his last time out against Marlon Vera despite his odds closing at -325.

In three of Almeida’s most recent four losses he’s been set as the betting favorite. This will be the longest odds Almeida has been set at as his tries to return to the form he was in during the early part his UFC career.

If you don’t want to eat the -340 juice on O’Malley, betting on him to win via TKO is a much more attractive option. Eight of O’Malley’s twelve professional wins have come from KO/TKO including two of his four wins within the promotion.

Almeida, on the other hand, has looked a little bit “chinny” in his recent losing skid as two of his four losses from come via KO/TKO including a clean knockout loss to Cody Garbrandt which seems to have been the beginning of his issues inside the octagon.