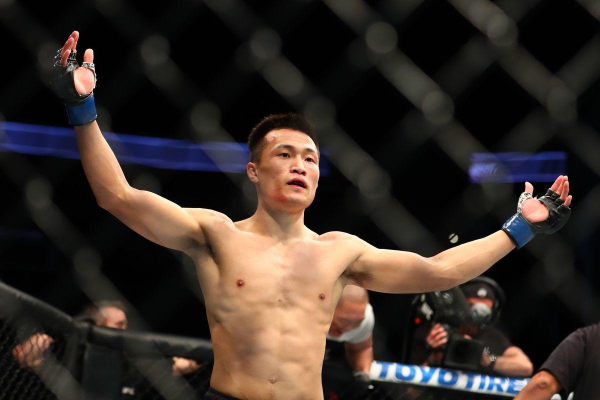 UFC Fight Night 139 will take place this Saturday Night, from the Pepsi Center in Denver, Colorado.  The card currently had 12 fights scheduled to take place on FS1 and the UFC’s Fight Pass.

Originally, this card was slated to be headlined by a featherweight war between Frankie “The Answer” Edgar and “The Korean Zombie” Chan Sung Jung, however, Edgar was injured about a month ago, and now Yair Rodriguez will step in and face off with Jung.

In the co-main event, we will see hometown hero Donald “Cowboy” Cerrone taking on “Platinum” Mike Perry in a Welterweight battle that should be a standup war.  Both of these guys like to utilize the standup but have various styles. Cerrone is a more methodical fighter whereas Perry likes to stand right in front of his opponent and try his best to knock his opponents head off.

Jung is 31-years old and enters this fight off a 1st round KO of Dennis Bermudez at UFC Fight Night 104. Jung hasn’t stepped in the cage since that fight with Bermudez, which was over 18 months ago on February 4, 2017.  Jung has never been a fighter that really fights very frequent, and it has never seemed that ring rust plays a part in his absence from the octagon.

Rodriguez is 26-years old and is coming in off a loss by doctors stoppage to Frankie Edgar in the 2nd round.  Rodriguez disagreed with his contract and caused him to miss some time from the UFC. He hasn’t fought since May 13, 2017, at UFC 211 and that is the longest stretch he has had without a fight, so it is tough to determine how he will do here.

The fact remains that “The Korean Zombie” has only fought 2 times since 2012 and now is facing one of the most talented featherweights in the division.  Oddsmakers have made Jung the slight favorite in this fight at -127, but the trends are telling us to jump on the Rodriguez bandwagon.

We don’t see Rodriguez losing two in a row and think Jung will have a hard time with the distance Yair will fight at. Look for Rodriguez to stay on the outside and pick away at Jung to get the decision win.

Beneil Dariush -140 —Dariush was originally scheduled to fight Chris Gruetzemacher, but due to injury, Gruetzemacher was injured and forced him out of the fight.  Thiago Moises will step in on short notice, and take the fight against Dariush. The last time we saw Moises, he was on Dana White’s Tuesday Night Contender Series and got the KO over Gleidson Cutis. Fighting a relative journeyman and fighting Beneil Dariush are two totally different things!  Dariush gets back in the win column here!

Donald Cerrone +180 — This fight is a battle of two totally different fighters.  Perry is going to stand right in front of Cerrone and dare him to knock him out. Perry struggled with a much smaller Paul Felder while Cerrone, unlike most of the fighters that Perry has faced off against, is smart enough to know better than to stand right in front of Perry.  I look for Cerrone to take this fight to the ground early and make it a grappling battle. Cerrone stands a great chance at submitting Perry in this fight early in the first round!