MMA Picks and Preview for UFC 228 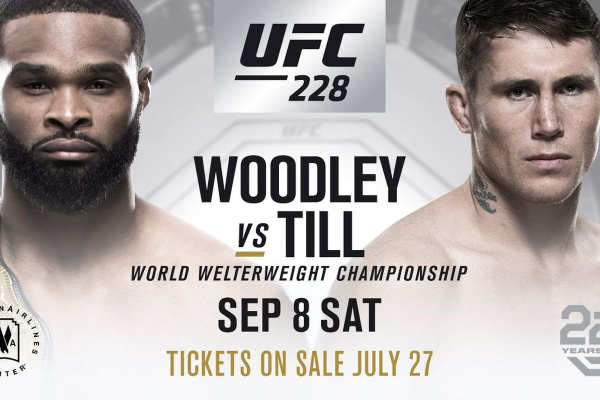 The UFC returns this week for UFC 228. This event will take place at the American Airlines Center in Dallas, Texasand will feature a 14 fight card, highlighted by a fight for the UFC Welterweight Title, as Tyron Woodley takes on Darren Till. There are several really good fights on this card.

The first 5 fights of this card can be seen over on UFC Fight Pass. Those early prelims are listed below and will feature Diego Sanchez competing in his 41st professional MMA Fight against Alex White.

The prelim card will take place on FX and will feature former Women’s Strawweight Champion Carla Esparza taking on undefeated UFCFighter Tatiana Suarez. There are also two bantamweight bouts that are going to be great fights, as Aljamain Sterling takes on Cody Stamann and Jimmy Rivera takes on John Dodson.

The main card will be on Pay-Per-View this week and features two title fights, which we will cover below. The card gets started at 6:00 PM ET on Saturday, September 8, 2018.

UFC 228 will feature two title fights, the UFC Welterweight Title and the Women’s Flyweight Title, on Saturday Night. This is the first time in a very long time that I can ever remember both of the current UFCChampions are the underdogs in their fights on the same card, where they are looking to defend their championship.

Tyron Woodley is 18-3-1 and has been the UFCChampion since July 30, 2016, when he beat Robbie Lawler for the UFC Welterweight Championship. Woodley has since gone 2-0-1 with wins over Demian Maia and Stephen Thompson. Thompson also went to a draw with Woodley.

Till is undefeated and is coming in off a 5 round unanimous decision victory over Stephen Thompson. Till has struggled with his weight cut, missing the cut in the Thompson fight, and this week throughout the media conferences, Till has looked like the cut is affecting him.

Both Woodley and Till are very good strikers, making this a standup war that should be very entertaining.

The Co-Main Event will feature Nicco Montano looking to make her first defense of the UFC Women’s Flyweight Title as she takes on former Bantamweight Title contender, Valentina Shevchenko.

Montano won the title on the Ultimate Fighter Season 26 and has not fought since that point, which was back on December 1, 2017. Montano was originally scheduled to fight Sijara Eubanks but there had to be a last minute replacement due to a health issue with the weight cut for Eubanks.

That replacement was RoxanneModafferi. Montano won the fight via unanimous decision. Now she will test her skills against a proven competitor in Valentina Shevchenko. Shevchenko has gone up against some of the best bantamweights in the world and has held her own! She recently dropped down to flyweight, which is where she should be fighting, and will now challenge for the UFCFlyweightTitle.

The top play from UFC 228 is Darren Stewart over Charles Byrd. Charles Byrd is getting a lot of hype and that hype is pushing his line upwards. This play could of gone in our Underdog with a Shot Play but we have another play for that spot, so we will go with Darren Stewart.

Byrd is coming off 2 wins on Dana White’s Tuesday Night Contender Series and a win in his UFC debut against John Stewart, who they call the “White Mike Tyson”. This guy is anything but Mike Tyson. He trains in the same gym as Conor McGregor and that pretty much got him into the UFC.

Byrd will now face Stewart who is fresh off a win over Eric Spicely. Stewart has fought tough competition and needs this win to prevent possibly being terminated from the UFC, as he has lost 3 of his last 4 fights overall. Play Stewart here as the underdog for the outright win!

UFC 228 Underdog with a Shot Play

Our underdog with a shot this week is Roberto Sanchez. Sanchez has a very strong submission game and to his benefit, his opponent Jarred Brooks is a wrestler. Brooks likes to go in for takedowns often and as we seen last time he fought, that can get him in trouble.

In Brooks last fight, he went in for a takedown and got fancy and basically knocked himself out on a takedown of Jose Torres. That shows a lack of submissionskills and against someone like Sanchez, that will be really bad for him. Sanchez will win this fight by choke late in the first round!