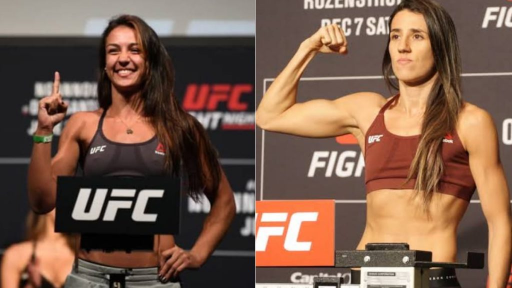 Amanda Ribas has been itching for a fight to see out 2020 but lost her chance when Carla Esparza pulled out of the fight. Now she has her chance at UFC 257 come January 23, 2021. That UFC card will be headlined by the Connor McGregor and Dustin Poirier fight.

Her replacement for the Esparza fight, Michelle Waterson has just, yet again, pulled out. Marina Rodrigues has, however, stepped in, few hours after the announcement of Waterson’s withdrawal. It is unclear at this point why Waterson pulled out as she has not given any reason yet.

Marina Rodriguez is seen as the perfect replacement as she is ranked one spot above Ribas (9) in the UFC 115lb rankings. Although Waterson was ranked 7th, a win for Ribas, who is currently ranked 9th will move up, higher than Watson. The all-Brazilian strawweight showcase will take place at Fight Island in Abu Dhabi.

At the rate Ribas is going, it is impossible to exclude her when mentioning UFC’s biggest stars in the women divisions. Her 10-1 run has been nothing short of exceptional as she has dominated most of her opponents with her wrestling and submission game. She had only two fights in 2020 following the canceled matchup against Esparza, both of which she secured victories at. Since her promotion to the UFC, she has won all four of her fights, with the first being in 2019 over Emily Whitmire via submission. She followed that victory up with another against Mackenzie Dern, giving her her first professional loss. Randa Markos and Paige Vanzant are the other two fighters she has won against.

Marina Rodriguez came into the UFC with a 10-0 run but has since performed below par. Since her promotion, the thirty-three-year-old is on two wins, one loss, and two draws run. Her last loss came at the hands of Carla Esparza. Her victory over Tecia Torres is what established her in the welterweight division. It is also her biggest win since her promotion. Her draws came at the hands of Randa Markos and Cynthia Calvillo. A victory over Ribas will end Ribas’ unbeaten run and will also account for another big victory in the division.

With the inclusion of this matchup, the UFC 257 card now features seven bouts;

Ribas could open up this PPV card, which will make it a 2 in 2 main event opener for the twenty-seven-year-old. During the summer, she was the opener of the UFC 251 PPV in Fight Island.

It is difficult to say which way this fight will go because both contenders have a lot to lose and also a lot to fight for. Ribas will be looking to continue her unbeaten streak, while Rodriguez will be looking to find some consistency by securing another win. We are all eager to see how this matchup will end, and hopefully, there not be a case of another withdrawal.