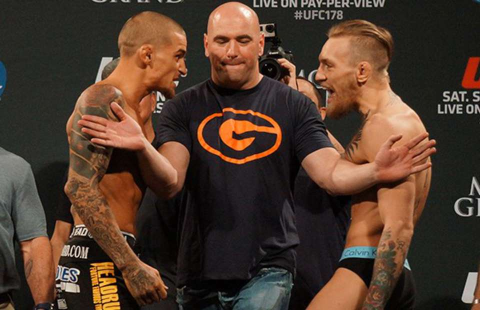 The return of Conor McGregor to the UFC octagon has finally been scheduled! The UFC has recently announced that he’ll be taking on Dustin Poirier, a rematch of a bout from 2014, in the main event of UFC 257 on January 23rd, 2021.

FanDuel has set Conor McGregor as a -225 favorite with Dustin “The Diamond” Poirier coming back as the +188 underdog.

McGregor made quick work of Poirier in 2014, needing only one minute and twenty-four seconds to win the fight via TKO. The Irishman originally opened up as a +190 underdog ahead of that bout, but the odds completely flipped before fight night as he closed as a -276 favorite, even steeper than his odds for the rematch bout.

McGregor’s History Since the First Fight

It’s no secret how Conor McGregor has performed since his first fight with Dustin Poirier. Since then he exploded on to the scene as one of the most iconic combat athletes in the history of the sport. He won the interim featherweight title against Chad Mendes in his second fight after the original Poirier bout, and then went on to beat Jose Aldo in thirteen seconds to claim the unified featherweight championship.

Conor McGregor has closed as a heavy betting favorite in almost every fight in his UFC career. He has closed as a plus-money betting underdog only once and that was his lightweight title bout against Khabib Nurmagomedov, a fight that he went on to lose. His only other UFC loss was against Nate Diaz when he closed as a sizable -300 favorite.

Poirier’s History Since the First Fight

Dustin Poirier, like McGregor, only has two losses on his record since the first bout but unlike McGregor, he’s seen quite a bit more action. He has a record of 10-2 (1 No Contest) since the original bout, with a shared common loss with McGregor in Khabib Nurmagomedov. His other loss came in 2016 via KO to Michael Johnson.

Dustin Poirier has closed as the betting favorite in all but two of his UFC fights since he last faced McGregor. He lost as a +285 underdog to Nurmagomedov, but he defeated Joe Duffy as a +160 underdog in 2016.

The original bout was Poirer’s last fight at the 145 lbs weight class and he’s fought at lightweight ever since, going 10-2 (1 NC) including an interim lightweight championship before losing the unification bout to Nurmagomedov.

McGregor, on the other hand, continued to fight at featherweight after the first Poirier bout but has since moved up in weight classes. He’s officially fought twice at lightweight, once in a victory for the lightweight championship to Eddie Alvarez, and once in a loss to Nurmagomedov.