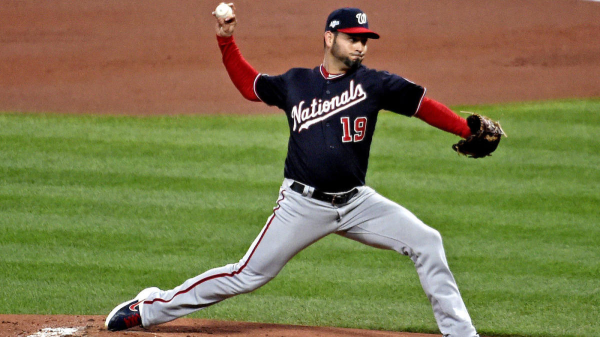 The Astros are desperately trying to take Game 3 with an eye on trying to get back into the series. To do so, they will turn to righty Zack Greinke (18-7, 3.27 ERA) to take the ball to take on the Nationals’ Anibal Sanchez (12-8, 3.63 ERA). First pitch for this contest is scheduled for 8:07 pm ET.

The moneyline for this matchup features the Houston Astros at -141 and the Washington Nationals at +131.

Astros Trying To Take One Back

Take it back has been the motto of the Houston Astros this whole season. If they want to win it all, that is exactly what they are going to have to do this World Series. Trying to take Game 3, they will be turning to Greinke. During the regular season with the Astros, Greinke was 8-1 with a 3.02 ERA in 10 starts.

Despite that, it has been a little rougher for the righty this postseason. In three starts this postseason, he is 0-1 with a 6.43 ERA, 1.43 WHIP, and opponents are hitting .268 against him. In 14 innings, he has allowed 15 hits, 10 earned runs, five home runs and has struck out 16 versus five walks. If the Astros have any hope of getting back into this one, he is going to have to pitch much better against what has been a sizzling Nationals offense.

The Astros definitely need to get it going on the offensive side, too. They are leaving runners stranded at an alarming rate, and what was one of the best offenses in the majors throughout the year has been mostly dormant this postseason.

One player who has pulled his weight has been Jose Altuve. The diminutive second baseman is hitting .358/.414/.717 with five home runs, eight runs batted in and 11 runs scored throughout the postseason.

On the opposite side, Alex Bregman has been uncharacteristically cold. While he did homer in Game 2, he is batting just .233/.400/.442 this postseason. Between Bregman, George Springer, Carlos Correa, Yordan Alvarez and others, they need to step up to have a chance of getting back into this one.

Game 3 could certainly be a pivotal one for the Nationals, as 3-0 sounds a lot better than 2-1. To try to make this happen, they will be turning to Sanchez. During the postseason, Sanchez has been absolutely filthy. In two starts, he is 1-0 with a 0.71 ERA, 0.63 WHIP, and opponents are hitting .116 against him.

In 12 2/3 innings, the right-hander has allowed five hits, one earned run, one home run and has struck out 14 versus just three walks. If he can give the Nationals another solid performance, he may put Washington on the brink of a World Series championship.

On the offensive side, Juan Soto has been absolutely electric. During just the World Series, he is hitting .571/.667/.1286 with two doubles, a home run, three runs batted in and three runs scored.

For the entire postseason, it has been third baseman — and impending free agent — Anthony Rendon who has been sizzling. He is hitting .325/.423/.525 with a home run, nine runs batted in and nine runs scored thus far. This is a team that has come out and taken it to two potential Cy Young Award finalists in Gerrit Cole and Justin Verlander and hopes to rock Greinke as well.

Despite the Nationals breaking the game open at the end of Game 2, this series has been mostly incredibly close, with just one or two plays seeming to be the difference in who leads. Still, the Nationals have prevailed while playing on the road.

Now, they get to come back home with Sanchez, who was dominant in his last outing, on the bump. I do think that the Astros have a slight edge in this one; however, it is not a definitive edge. With that in mind, I think that bettors would be wise to take the favorable moneyline in each contest, and, in this one, that is Washington. For my money, I am taking the Nationals at +131.