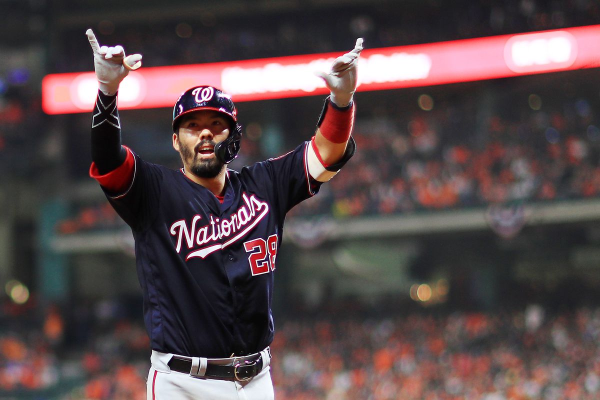 The Houston Astros entered the 2019 World Series as the largest favorite in 12 years with -235 odds. Two games later, the Washington Nationals are now just two wins away from claiming the title for themselves.

After taking down Gerrit Cole in Game 1, the Nats entered the second contest of the Fall Classic without fear of Justin Verlander. And with a six-run seventh inning, Washington doubled its series lead on the road in Houston.

In the end, Verlander was the losing pitcher of a 12-3 blowout that only morphed into a lopsided affair after a four-run first inning gave way to a tense pitchers’ duel. Now 0-5 in six World Series starts, Verlander gave up four earned runs in six innings after not being able to record an out in the seventh.

The winning pitcher, Steven Strasburg, was able to settle in after allowing two runs in the first. Strasburg also pitched six innings, allowing no more runs and striking out seven batters.

The deadlock was broken early in the seventh when Nationals catcher Kurt Suzuki, who entered the game with a .043 average in October, stepped to the plate and knocked Verlander’s 100th pitch of the evening out of the park.

Suzuki’s homer opened the floodgates for the Nationals, who went 10 straight batters without a strikeout and blew the game wide open. With contributors all throughout the lineup, like Asdrubal Cabrera (three RBI), Adam Eaton (two RBI), and Anthony Rendon (two RBI), Washington is set to head home with a 2-0 series lead.

More Of The Same In Game 3?

The Nationals have taken down Houston’s two co-aces in back-to-back games, but the job isn’t over yet. Now it’s time to focus on Friday night’s Game 3, in which the Nationals will attempt to defend the field where they earned a 50-31 record in the regular season.

For the record, the Astros went 47-34 in away games during the regular season.

So, will the Astros stop the bleeding, or will the Nationals earn their ninth straight victory and put themselves a single game away from a World Series title?

The interesting part of Greinke’s start will be that he’ll get a chance at the plate in the National League park. As a hitter, Greinke led all pitchers with three dingers and eight extra-base hits during the season.

With his arm, Greinke has been far from unhittable this postseason, but he posted a 3.48 ERA over his last two starts, which lasted 10 1/3 innings. In total, Greinke is 0-2 with a 6.43 ERA this October.

Sanchez will be hoping for some of that run support the Nationals have been gracious with through the first two games of the series. Making his second career World Series start, Sanchez can lean on his previous experience when he threw seven innings of two-run ball for Detroit against the Giants in the 2012 Fall Classic.

Thus far, the Nationals have been the underdogs throughout the postseason. Of the eight teams who made it to the divisional round, Washington and its 18/1 odds of winning the World Series were the worst.

Now, just two games away from October glory, Washington gets to play the underdog role in Game 3 as well. For Friday’s matchup, the Astros are currently -125 favorites to break Washington’s eight-game winning streak.

However, the Nationals can no longer call themselves underdogs when it comes to the series odds. At -275, the Nationals are now the favorites to win the World Series.

Will the swing in odds give Houston the edge it needs? We’ll find out Friday night.