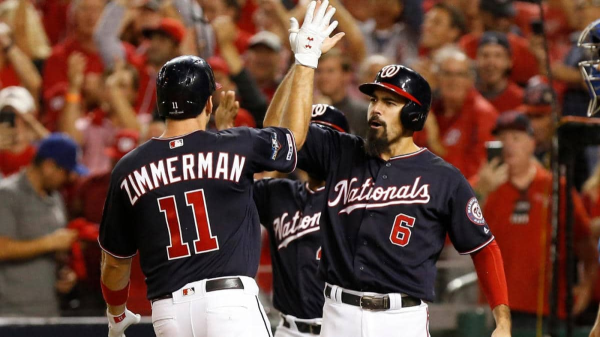 And then there were four. In a season that has gone on since February when pitchers and catchers reported to spring training, Major League Baseball is down to four teams. On Friday, the two teams from the National League will square off in the National League Championship Series when the Washington Nationals travel to Busch Stadium to take on the St. Louis Cardinals.

The Nationals had a remarkable rally in Game 5 of their series to knock off the top-ranked Los Angeles Dodgers. The Cardinals also made it to a Game 5, but for them, it was less about how it ended and more about how they started. The Cardinals put their Game 5 away early after putting up a whopping 10 runs in the first inning.

The moneyline for this matchup features the Washington Nationals at +111 and the St. Louis Cardinals at -121. The over/under in terms of runs scored is set at 8.

On the offensive side, the Washington Nationals were the better of the two teams during the regular season. They ranked sixth in the majors, averaging 5.35 runs per game (5.13 on the road). The Cardinals finished 19th in the league, averaging 4.73 runs per game (4.75 at home).

One through three, the Washington Nationals have one of the best trios of pitchers in the league behind Max Scherzer, Stephen Strasburg and Patrick Corbin. In Game 1, though, it will be Sanchez that they look to in order to steal Game 1. Sanchez had a solid season, going 11-8 with a 3.85 ERA, 1.27 WHIP, and opponents hitting .236 against him. Still, he is not as dominant as the aforementioned three.

In 166 innings this year, he gave up 153 hits, 71 earned runs, 22 home runs and struck out 134 versus 58 walks. In his last outing, though, he was superb. In Game 3 against the Dodgers, he went five innings, allowing a single run and striking out nine. If he can replicate a similar performance, the Nats might just get the upper hand despite starting on the road.

Offensively, the team is built around the powerhouse third baseman, Anthony Rendon. Given that he is a free agent after the season, Rendon picked a wonderful time to have a dominant season. This year, he hit .319/.412/.598 with 34 home runs, 126 runs batted in and 117 runs scored.

In the postseason, he has also been solid, hitting .350/.423/.650 with a home run, five runs batted in and six runs scored. Throw in the likes of players like Trea Turner and Juan Soto, and this offense could give the Cards fits.

Cardinals Hope For Best With Mikolas

Like the Nationals, the Cardinals will not be able to turn to their ace, Jack Flaherty, in the opener. Instead, the Cardinals will trot out Mikolas in Game 1. On the season, Mikolas was 9-14 with a 4.16 ERA, 1.22 WHIP and opponents hit .272 against him.

In 184 innings, he allowed 193 hits, 85 earned runs, 27 home runs and struck out 144 versus 32 walks. Like his counterpart, Mikolas also had a solid divisional series. In Game 1 of that series, he held the Braves to just one run over five innings.

Offensively, the Cardinals have gotten really nice production from both Marcell Ozuna and Paul Goldschmidt. Ozuna is hitting .429/.478/.857 in the playoffs, with two home runs, five runs batted in and six runs scored. Goldschmidt is hitting .429/.478/.905 with two home runs, two runs batted in and five runs scored. After inconsistent regular seasons, the Cardinals will be ecstatic if these two can keep their production at a high level.

I really struggled to pick a winner in this one. Both of these teams are riding emotional Game 5 victories into this one, and neither one of them can rely on the top of their rotations in the opener. The Cardinals are 51-32 this year at home, but the Nationals are a respectable 45-39 on the road.

With it being so close, I tend to lean towards the underdog, mostly because of the more favorable moneyline. While the split in moneylines isn’t particularly large, I am still taking the Nationals to take Game 1 at +111.