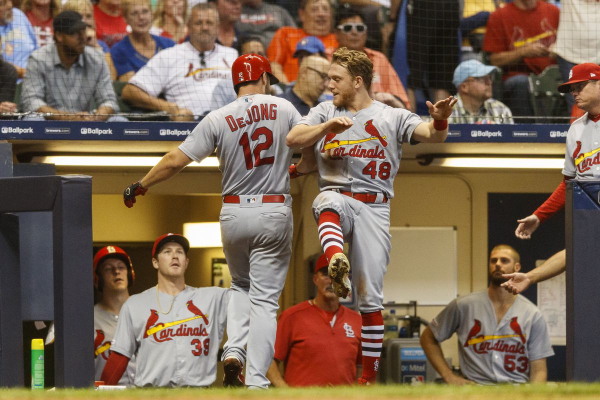 Tuesday features a National League Central showdown as the St. Louis Cardinals (72-58) take on the Milwaukee Brewers (67-64) at Miller Park. This is the second of a three-game series, as the Cardinals took the first game in convincing fashion, 12-2. In that game, Yadier Molina had one of the big sticks of the game, going 2 for 4 with a home run and three runs batted in.

The moneyline for this matchup features the St. Louis Cardinals at +135 and the Milwaukee Brewers at -145.  The over/under for runs scored sits at 9.

With just a little over 30 games left, the Cardinals know that every game is imperative, especially in a division that continues to flip-flop leaders on a regular basis (mostly between the Cardinals and Cubs). On Tuesday, the Cardinals will turn to Mikolas to try to get another win under their belt.

On the offensive side, Tommy Edman continues to be a pleasant surprise for the Redbirds. Over the last 30 days, Edman is hitting .317/.349/.436 in 101 at-bats with a home run, eight runs batted in, 16 runs scored and five stolen bases.

Also in that time Marcel Ozuna and Paul Goldschmidt have hit well.  Ozuna is hitting .312/.411/.558 with four home runs, and Goldschmidt is hitting .280/.324/.490 with five home runs.  Goldschmidt has also had success in his career against Houser, going 2 for 6 with a home run.

Brewers Need To Get Rolling

Despite falling 5.5 games out of first place in the division, the Brewers are still very much alive in the playoff race, although they need to get it turned around quickly. In the Wild Card, they sit just 2.5 games behind the Chicago Cubs for the second spot. To try to get on the right track, they will turn to Houser.

Yelich has also had some success against Mikolas, hitting .214 with a home run and three runs batted in. Other Brewers to have homered off of the righty include Mike Moustakas, Eric Thames, and Lorenzo Cain.

On the one hand, the St. Louis Cardinals have played really good ball lately, winning five in a row. On the other hand, Mikolas has not played well lately, throwing to the tune of an 8.44 ERA over his last three starts. Houser, on the other hand, has thrown well lately, giving up just three earned runs in the last 18+ innings. Still, it is hard to ignore the hot streak the Cardinals are on, especially when they are the underdogs in this one. For my money, I am taking St. Louis at +135.