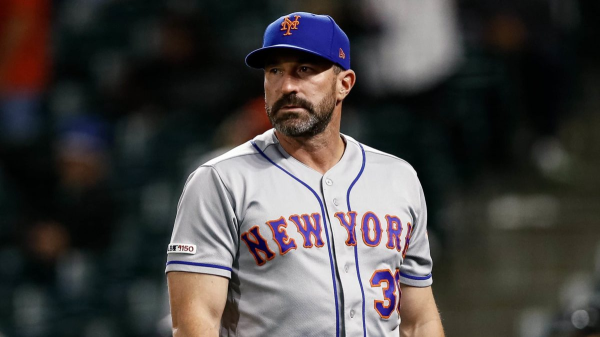 A midsummer streak that lifted the New York Mets into Wild Card contention wasn’t enough for Mickey Callaway after missing the postseason. The Mets decided to cut ties with Callaway on Thursday following an 86-76 year.

Now, New York joins an ever-growing list of clubs in search of a new manager. In addition to the Mets, the Angels, Cubs, Giants, Padres, Pirates, and Royals make up the seven teams attempting to find the next man to lead the way to October baseball.

For Callaway, it’s a disappointing ending to a tough spell in New York that was highlighted by two streaks. In his first year in charge, Callaway and the Mets jumped out to an 11-1 record to kick off his tenure with the team.

This year, New York went through an early second-half stretch in which the club won 15 of 16 games. That streak launched the Mets into the thick of a playoff race, but one New York ultimately didn’t win.

In addition to finishing third and 11 games back of Atlanta in the NL East, the Mets failed to catch Washington and Milwaukee for one of the two National League Wild Card spots. New York was the first team out, leaving a three-game gap between themselves and the Brewers.

Now with Callaway gone, the Mets appear to have one of the more talented rosters among teams without a manager. So, who’s next, and what will he be working with?

As a team, the Mets were decent offensively. With 791 runs scored on the season, New York ranked 13th among all teams. Led by rookie Pete Alonso, the Mets lineup also knocked out an 11th-best 242 home runs.

The pitching staff of the Mets posted an ERA of 4.24, which was good enough for 11th in the majors. With 12 shutouts, New York was among the top six teams in the MLB.

For a new manager, the most exciting part of this Mets team might be the pitching staff going forward. General manager Brodie Van Wagenen recently said the Mets expect to return both Noah Syndergaard and Edwin Diaz to the team.

The Mets also have something to be excited about regarding the offensive side of the game, as Alonso broke the rookie homer record by smacking out a team-high 53. Alonso also managed to bat in a team-high 120 runs while hitting .260.

Yes, the Mets will need to improve the roster in order to catch up to a young, talented Atlanta Braves team. However, there’s a solid core of players who are ready to win now in New York.

When you look at the landscape of managers seeking work heading into 2020, there’s a fairly lengthy list. Everyone from Joe Maddon to Brad Ausmus to Joe Girardi and even David Wright are among the names being tossed around.

Which one will land with the Mets in New York?

Going by the odds, it would seem that both Joe Maddon and Mike Scioscia are destined for other gigs. Before news of the Angels opening, Maddon was the odds-on favorite to become the next manager of the Padres at +150. Immediately behind Maddon was Scioscia, who was given +300 odds.

With Maddon’s history with the Los Angeles franchise and the apparent firing of Ausmus to make room for Maddon, the former Cubs and Rays manager returning to the Angels’ bench seems like a no-brainer.

For the Cubs, David Ross holds the best odds to claim the manager job at +200. Joe Espada is next on the list with +300 odds.

Without specific odds for the Mets job just yet, there are a few guys who don’t look poised to take one of the other openings and who may be the best fit for New York.

First, Joe Girardi has the experience, the track record, and the history in New York.

Although the Mets aren’t likely to go with another inexperienced manager after Callaway, Beltran’s name has come up quite a bit. Beltran’s history in New York could be a vital aspect of the discussion.

Also worth noting is Espada, who’s a hot candidate featuring hands-on experience, a good understanding of analytics, and the added benefit of working for one of the best teams in baseball in the Houston Astros.